Guest Post: Sumo and a Trip to Mars from Author Jennifer Griffith

Ladies and Gents, I am just tickled pink to introduce our guest blogger today, Jennifer Griffith, author of Big in Japan, just released this past week.  Find my review of this fun book here and don't forget to enter our Rafflecopter drawing for a free copy!  I admire Jennifer not only for her writing skills, but also for her determination to write about something that interested her even though she didn't know much about it.  She made herself an aficionado and shared this subsequent story in her delightful voice.  Heeere's Jenny!

SUMO AND A TRIP TO MARS


I’ve just finished my fourth novel. Yeehaw! Sometimes I think Big In Japan is just as much a surprise to me as it is to everyone else. It covers a topic I’d never have expected to write about, and the first six months as I frittered with the story I kept rolling my eyes at myself because it’s about…sumo wrestling. With a love story.

Who writes about that?

No one. Especially not me. I’m kind of just a short white girl. I’m not in that game at all! However, when I lived in Japan for 18 months I got a love for the country and the people and the language, and sumo is such a part of the Japanese culture, how could I resist? Then, as I dug deeper into the topic it got more and more fascinating.

Bottom line, sumo is simple: try to get the opponent to step outside the ring or touch the ground with any part of his body other than the bottom of his foot.

Easy, right? Not if the opponent is e-nor-mous. Which they all pretty much are. 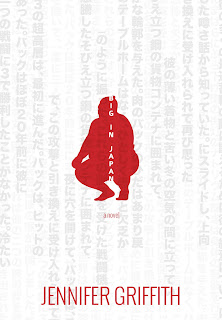 As I researched the topic to write the story of my hero—Buck Cooper, an obese Texan nice-guy who was functionally invisible in his own life and goes to Japan where he accidentally becomes a sumo wrestler—I learned that sumo has a darker side, with scandal and hazing and general seediness. There was plenty to throw at good old Buck to keep him on his toes and help him overcome his self-doubt.

One great thing I realized through this process is that in choosing a topic for a novel I had to be careful to pick something I found engrossing enough to keep my interest for a good long time. A novelist is basically investing years of his/her life in the characters and setting he/she chooses. It’s a good idea to make sure we pick something we won’t mind spending that much time with!

I’ve heard that reading a novel is like a road trip, and the reader wants to go with characters he likes. Well, if so, writing a novel is like a journey to Mars. Three years in a confined space! That’s why even though sometimes I come up with a dark topic I might like to investigate and turn into a novel, I just don’t ever bring that to fruition. I just don’t want to be in a dark place for as long as it takes to birth a novel. For Big In Japan, luckily, I loved Buck, and I loved Japan, and as I dug into sumo, I found it to be a largely-untapped treasure trove of conflict and detail to build into my novel.

Here’s hoping all the novelists out there can find loads of fun researching and bringing forth great reads for us bibliophiles!

About the author (from Jolly Fish Press): Jennifer Griffith grew up in Idaho and learned to speak Japanese while she lived in Japan for a year and a half during college. She earned a degree in writing, worked for the U.S. Congress, and has three previously-published novels. She and her husband have five children and live in Arizona. At 5'1" Jennifer is far too short to ever consider sumo wrestling.

Don't forget to enter the free drawing below! a Rafflecopter giveaway