See my review of Shadowland here. 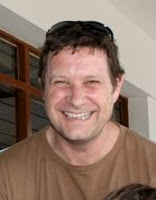 
Born in Essex, England, I have since been lucky enough to live and travel in many countries around the world. In fact I have lived more time outside of England than I have living there! Home for me now is just outside of Barcelona, Spain where I live in a house in the middle of the forest with my Dutch born wife and two children.
My writing is mostly fantasy and many of the experiences I have had in Asia, Africa and the middle east come to life in my writing. The Flight of the Griffin follows the adventures of a group of young orphans as they battle demons and bandits on a magical quest to stop the world tipping into Chaos. Shadowland blends fantasy with history as an old story teller takes his audience back to Britain's dark ages.

Penny:  I really enjoyed Shadowland, especially the vivid post-Roman world you created.  I could feel my feet sticking the sucking mud and twitched at the feel of flees and lice.  Are you an historian by profession or a dedicated enthusiast?


Chris:  Hi and thanks for the welcome to your fantastic blog, I'm thrilled to be here. I'm really happy you enjoyed Shadowland and I'm blushing furiously at any thought you might have that I have any background in history! No, I'm not a historian but the past does interest me greatly. When I was a kid my favourite hobby was to dig up old bottles from Victorian rubbish tips! I love history, but it also kinda scares me to think what went on as 'normal' hundreds of years ago, it can be a bit of a morbid interest at times.
In the era I write about in Shadowland, women went into battle alongside their men and most brought their dogs as well, many warriors fought naked, Fascinating!

Penny:  Your love of nature and of England also flows strongly through the book.  Does your vocation or avocation give you such a broad knowledge base?


Chris:  I love the natural world and would far prefer to spend the day in the woods or mountains than in a city. I grew up living in the countryside and live in a house in the woods now, just outside Barcelona in Spain. My job is raising money and awareness for a company that replants the rainforest, which is very fulfilling. I still love England, but I also love our world as a whole and have traveled extensively in Europe, Asia and Africa, I think my experiences in these places comes though in my writing.


Penny:  What inspired you to write your book?


Chris:  When I write, I do so to entertain myself. I rarely sit down with an idea other than what I have come up with for a great first line. I then build from there and look for where the direction takes me. When he started telling his story at the beginning of the book I had no idea the storyteller in Shadowland would be...someone else.

Penny:  Why did you choose Uther, rather than Arthur as your protagonist


Chris:  The Arthur legend has been written about many times, we all know Arthur but he sure had a strange surname, Pendragon, where did that come from? And was he born a king or was his father a king before him? Where did Merlin come from? He was old when he appears in the Arthur legend. These kind of questions make it much more tempting to weave a story around the very few known facts of a time referred to as 'the dark ages' rather than spin out a retelling of the legend. There is no historical reference to Arthur beyond stories and legend, but a man named Uther existed. The Romans were there and leaving at the time and the Saxons saw Britain as an easy target to take over. Someone had to step in and lead the tribes...all this gave me opportunity for my story. I just had to throw a little fantasy and imagination at it!

Penny:  What especially about the Arthurian legends moves you?


Chris:  The Arthurian legend is compelling on many levels. Shinning nights in armour, a love tryst between Arthur, Guinevere and Lancelot, magic swords and crazy Druids, it is a fantastic legend cooked up hundreds of years ago that really may have some place in history, that's what is so interesting about it for so many of us. It may have happened a lot like they say...maybe but what would have happened before if it is all true?

Penny:  Any sequel in the offing?


Chris:  Not yet. My second book which is a YA fantasy called The Flight of the Griffin is now out and I'm busy with the sequel to that. I'm looking to dip back into something more historical when I finish, maybe something in the Victorian era, maybe second world war times, I have lots of ideas. I have also been thinking of writing a story woven around the story of Guy Fawkes and his plot to blow up the British houses of parliament back in the year 1605.

Penny:  You create vivid imagery of the druids.  What sources did you use to draw on that?


Chris:  I read a lot of historical works that spoke of the Druids. Lots about Boudicca, warrior queen of the Britons who tried to defeat the Romans and was guided by the Druids. Also a lot of what I write is just me trying to get into the head of a Druid. I knew that they were attracted to natural wells, thought to be full of natural energy and places connecting to the world of spirit, the Shadowland. Staying alone, surviving on what you could find and trap in the immediate area might possibly send a Druid calling one of these wells home a little potty, so one of the Druids in Shadowland is weird to say the least!

Penny:  Who is your favorite character in the book?


Chris:  I enjoyed writing for many of the characters in the book, but I especially enjoyed the character of Cal. Without giving out a spoiler let's just say he has three parts to his character in the story which makes it interesting. I write of him when he is old, when he is young and when he is...very different. He is also the character who walks the Shadowland.

Penny:  If you wrote a PREquel about Meryn and Clarise, what would we learn about their past?


Chris:  That might be a pretty cool idea. I think I would take them back to some troubled past where they were trained in the ways of the Druids and walked the spirit path in the Shadowland to learn the answers to all things. Many spiritual cultures believe that everything happens as one. The past, future and present only flow for us so that we might grow and become greater beings. All of this might take some very special learning...I shall have to mull that one around!

Penny:  Are there any other eras that you are particularly fond of?


Chris:  I mentioned the second world war, particularly the war in Europe, this is because my grandparents went through this, my parents were children at the time and my mother tells of living in London listening to the sound of bombers overhead and the shrill scream of the bombs falling. Awful times but interesting.
I'm also interested by the Victorian times but I'm a little wary of of writing for this era as so many authors are writing steam punk based in this era. But they used to send small children up chimneys to clean them and everyone, even the children drank beer all day as the water was so contaminated...very tempting to set the a story in this era!
I find all stages of history interesting. Right now we are living in one of the most interesting times in history. These are times of great change, hopefully of awakening to a better world, certainly a different one where we are being given the opportunity to wake up! Turn off the tv and wake up now, the tv is dulling everything about you! Oh, but remember, reading books is ok, it is an exercise for the brain!

Penny:  What's next for you as an author?


Chris:  I'm now selling quite a few books as I have two now available as ebooks and in paperback, but I'm not selling enough... yet, to write full time. I would love to be writing full time and that is my goal, hopefully I will be able to achieve this in the next few years. In the meantime, I will finish the Sequel to The Flight of the Griffin, which is already getting great reviews. The Sequel is called Chaos Storm and should be out later this year. Then I get to look for a great first line again, I can't wait!

Penny:  Thanks so much for your time.  I look forward to your next endeavor.


Chris:  Thanks so much for speaking with me today, I really appreciate the opportunity to talk about my books and to meet you all out there today!

Don't forget to enter to win a free copy of Shadowland on the Rafflecopter form below!