Cover Reveal: The Ballad of Allyn-a-Dale

It's my very great privilege to participate in the cover reveal of Danielle E. Shipley's next novel, The Ballad of Allyn-a-Dale. Danielle is one of my favorite emerging authors, and I can't wait to sink my teeth into this work. This looks to be one tantalizing series! 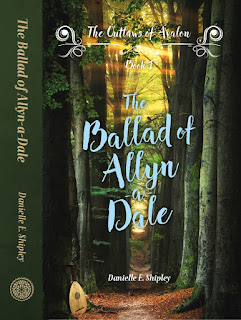 The Ballad of Allyn-a-Dale

The Outlaws of Avalon, Book One

Welcome to Avalon, a Renaissance Faire where heroes of legend never die. Where the Robin Hood walking the streets is truly the noble outlaw himself. Where the knightly and wizardly players of King Arthur’s court are in fact who they profess to be. Where the sense of enchantment in the air is not mere feeling, but the Fey magic of a paradise hidden in plain sight.

Enter Allyn-a-Dale. The grief of his father’s death still fresh and the doom of his own world looming, swirling realities leave the young minstrel marooned in an immortal Sherwood Forest, where he is recruited as a member of Robin Hood’s infamous outlaw band. But Allyn’s new life may reach its end before it’s scarcely begun. Their existence under threat, the Merry Men are called upon to embark on a journey to the dangerous world Outside – ours – on a quest which must be achieved without delay, or eternity in Avalon will not amount to very long at all. 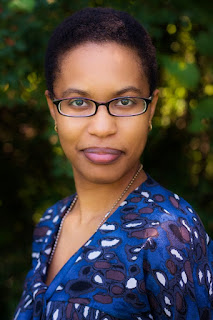 Danielle E. Shipley is the author of the Wilderhark Tales novellas, the novel Inspired, and several other expressions of wishful thinking. She has spent most of her life in the Chicago area and increasing amounts of time in Germany. She hopes to ultimately retire to a private immortal forest. But first, there are stories to make.

The Author’s Thoughts on the Cover

The Outlaws of Avalon trilogy is my baby, so I knew its faces had to blow me away. For Book One’s cover, there were a couple elements I for sure wanted to highlight: 1, the forest (because SHERWOOD), and 2, the lute (because Allyn-a-Dale). The rest, I mostly left up to my designers – photographer Lars van de Goor, and his son Miles.

A couple drafts later, this was the gorgeous result. The elegant swirls! The delightful rosette on the spine! Of all the darling touches – a ROBIN perched over “Ballad”s second A! And, of course, the must-have lute sitting sedately amongst the trees.

The minstrel blue, the greenwood green, the magical splash of sunlight… This cover doesn’t just say “The Ballad of Allyn-a-Dale”: it sings it.

Allyn would have known Will Scarlet for a relation of Robin Hood’s even had he not been introduced as his cousin. Though clean-shaven, younger, and framed by thick locks of gold tinged with the color of his name, Will’s face was patently similar to Robin’s, with the same blue eyes that sparkled cheerily at Allyn when the two were presented to each other.

“And where’d you pick this fellow up, then, Robin?” he asked blithely.

Will’s brows leapt toward his crimson cap’s pointed brim. “Wish I were Allyn!”

“Joking, joking,” Will waved aside Marion’s halfhearted rebuke. He coughed. “…Mostly. So, Allyn-a-Dale — looking to join the Merry Men, are you?”

“I don’t really know,” Allyn said doubtfully. “What are the Merry Men?”

To Allyn’s heart-thudding dismay, Will answered, “We’re an infamous band of outlaws.”

“Not really,” Marion hastened to jump in.

“It’s complicated,” said Robin. “But we’re really not at liberty to tell you much more about it until we’ve spoken to Merlin.”

“That would be King Arthur’s chief counselor and illustrious wizard,” Will said in answer to Allyn’s questioning expression. “He literally runs the show around here, so—”

“No,” said Little John, his gaze a grim weight on Will Scarlet.

“Oh, would you chillax, you pedant?” Will huffed, facial muscles ticking with minor irritation. “I know you think the Outsiders have been using the word with nary a care to its meaning, of late, but I know what ‘literally’ means, and in this case, I literally meant ‘literally’!”

The marginal lowering of Little John’s brow silently warned what he would literally do to Will if he said that word but once more.

“And they’re off,” said Robin, shaking his head. “Don’t worry, Allyn, they only bicker like this when they’re both breathing.”

Allyn’s lips twitched toward the beginnings of a smile, but froze halfway, his mind only just now becoming fully conscious of what he’d heard. “Robin,” he said, fighting a sudden swell of anxiety. “Did Will just say we’re off to see a wizard?”