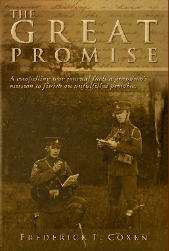 This is the third week I've featured author Rick Coxen and his book, The Great Promise, the soon-to-be-released memoir of his grandfather's experience in the First World War.  The book is poignant, action-packed, and disturbing in some places, but I find it an important contribution to anyone's library who understands that if we do not know our history, we are condemned to repeat it.

Author Interview, Part 2: Getting to Know Your Grandfather


Penny:  Let's start with the lighter side of your grandfather's journals.  I adore his flare for classic British understatement.  I can just hear his accent in my head saying, "we had a rather rough time of it" as he and his mates scuttled through heavy fire and mortars to repair telephone lines, or "it's a bit hot" with shells bursting over his head as fast as machine-gun fire and missiles big enough to make 25-foot deep craters blowing up all around him.


The next salvo sent a good-sized piece that grazed my cheek, ultimately burying itself about 2 inches into the ground at my feet.  After scratching it out of the ground, I thought to myself that if I had been a couple of inches closer it would not doubt have given me a nasty knock.

Then there's the detached unflappability: the gunners taking bets about whether or not the German shells will take down a specific structure and what not.  Or this:


While waiting for George and Collins to return, I was entertained by the combination of bursting shells, artillery fire, and rockets being launched from both our and the Germans' trenches.  They lit up the heavens like a gigantic fireworks display, similar to the ones I watched as a child.

Then there's his very British obsession with tea that got him and his mates in more than one scrape.  I always suspected the stereotype a gross caricature, but apparently not.  He also doesn't think much of the French (classic British).  Do you have a favorite passage of wit or humor that stands out especially?

Rick:  Like you, I enjoyed his understatement of situations. Actually Penny my grandfather didn’t have a noticeable British accent, at least one I could detect as a kid.  How about [these quotes]:

German Cavalry were very close, so we marched through the night and halted on the roadside about 3:00 a.m. It was less than a minute and I was sound asleep on a friendly heap of stones.

At one point the German artillery was shelling heavily all around us. George and I had to lay down to avoid being hit by shrapnel. The shelling continued into the afternoon and the sun was hot as we laid there unable to move. I must have been very tired for I actually went to sleep for a while. Later I was awakened when one of our staff officers was talking nearby. He must have thought I got bowled over because he was shocked when I started to move!

As the day progressed, storm clouds moved in and by nighttime it started raining hard. We moved positions, and in the process I was wet through. By now I had gotten so used to it that when I was ready to sleep I just crawled under a gun limber. While lying there I thought to myself, “I would give anything for something hot to drink and some good food.”

On the 20th of September I managed to get a little drop of water to wash my face, for it had not seen water for 8 days and I had not shaved for over a fortnight. I looked at myself in someone’s little pocket mirror and thought, “What a picture I am.”

Late that night I was ordered to get into communication with the 2nd Infantry Brigade. This required me to lay down additional wire, an uncomfortable task.>

Rifle bullets kicked up dirt as they fell around me. However, I did the job without mishap and got back to my dugout.

This is a good one:

One day during this period I went into Bethune and found a place to take a much needed bath and a change of underclothing. I knew that I was beginning to smell like livestock so taking a wash must have been a relief to my chums.


Penny:  The journal reveals your grandfather to be anything but the common foot soldier slogging it out in the trenches.  His education would indicate a gentleman.  Are you aware of his/your family history?  What were his circumstances before the war?


Rick:  His father was a sail-maker, which in the early 1900s wasn’t a real viable occupation. My grandfather was an electrician by trade. He had joined the Royal Field Artillery special reserves, which seemed to be similar to our national guard, right out of high school. I’m not sure where my grandfather received his polish, but his self-confidence must have been the result of his up-bringing.
I believe that he came from a family of seven brothers and sisters. I’ll have to check his position in the pecking order. . . . I was just a kid when I met a couple of his sisters, so I wasn’t aware of their interaction. Since my grandparents came to the US in 1922, I never met my great grandfather or any other relatives. I do believe that they looked up to him because he was so successful in business once he came to the US. 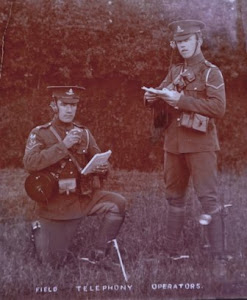 Penny:  Judging by his journal, he was very resourceful, tenacious and intelligent, not to mention courageous.  His superiors appeared to think very highly of him and relied on his judgment a great deal.  He mentions that at one point his commander put him up for promotion into the ranks of officers and strongly suggested that he "not turn it down this time."  Do you know the story about the previous time?


Rick:  I do not know a great deal of his early military experience. I do have some documents pertaining to his training as a signalman (credits in composition), which is no doubt why his journal is so well written.

Penny:  Your grandfather's character seems further born out in events after the end of the journal, including his promotion and the significant commands and responsibilities he was given.  He seems the classic stiff-upper-lip Brit, stand fast, keep your mouth shut and get the job done.  Perhaps that prevailing attitude carried over in his family life (i.e., his relationships with his progeny?)   Your thoughts?


Rick:  I think you are on target about the stiff upper lip, get the job done.  Since we’re on the subject, I didn’t know my grandfather very well. His stoic demure made him seem unapproachable. He didn’t interact with his grandchildren on a personal level. From bits and pieces of stories that my father told, he was a stern father and common with parents of that time, children were to be seen but not heard.      My father tried to get more involved with his kids; I suppose to improve on his father’s parenting. However, he also inherited the English stoic front, which presented a barrier for a close interactive relationship.  Later in life I realized that in his own way he did involve himself in my life, but that is another story.
Since I never talked to my father about his upbringing I don’t know the relationship between my grandfather and his children. I do know that he ran the roost and at one point when my grandmother was visiting relatives in England he moved into a new house, although I don’t know the entire details like she might have known but he was the decision maker.
My father made a few comments about his father being a disciplinarian. I believe from his journal that he loved his children but expected a lot. I got the feeling that the relationship between my aunt and grandfather were a bit strained but what does a kid know.

Penny:  How did this affect him in his professional career?

Rick:  He was that way with his children and running his company. From different family conversations he was pretty much all business.  He ran his company like an army unit. My father was somewhat like this when he took over the company. In fact one summer he almost fired me!

Penny:  Reading his journal, it seems impossible that he could have escaped the effects of post-traumatic stress disorder, considering the horrors and atrocities he witnessed.  However, he belonged to a generation that didn't talk about such things.  How do you think that affected his personal life?

Rick:  Like you, I wonder how he handled his war traumas. However I’ll never know the answer to this question. According to his letter written in 1945 he did suffer nightmares. I can’t imagine the impact of being shelled for hours on end would have on your mental state. He had to have experienced feelings of insecurity not knowing if the next shell would have his name on it; it would have been a constant fear.

Penny:  Of all the character traits your grandfather demonstrated, what do you think the most significant to his progeny?  Which one is the strongest amongst his children and grandchildren?  What is the most admired?  The most unfortunate?  What kind of legacy did he leave you all?  How many descendants does he have at this point?

Rick:  Genetically his character traits were split between my father and uncle. My father was a quiet unassuming man that was self made. He didn’t go to college, even-though he was qualified, because his place was working for my grandfather.  He could have gone to college and major in mechanical engineer or an accounting. I say this because he designed or redesigned many of the machines in the company and he was also the CEO/CFO.      My uncle received a more outgoing personality and was the salesman for the company – much like my grandfather.
My brother and I received more of the Coxen traits related to my grandfather than either of my cousins. My uncle’s son, also a Frederick, doesn’t have all the tools in his bag, which is pretty much the same case with my aunt’s son.
I received the tenacity, mechanically inclined, good looks, mass intelligence and overall good guy. My brother is the detailed, accounting side of my father – although he didn’t receive my good looks!
Of other family members I believe I’m the closest to my grandfather’s traits. I say this because I’m very independent, resourceful, and brave. The brave part is my experiences while working for Rocky Mountain National Park and being a member of the search and rescue group. I used to do technical climbing, which requires one to be a little crazy to expose themselves to the dangers of falling, which I did on one occasion.

Next week:  turning a box full of forgotten momentos into a revealing memoir.

Hi Penny, this seems like a great book. Fantastic review and author interview. Thanks.
Best
Suzy

Thanks, Suzy. It really is. The great news is, it's now available on CreateSpace.com and should be on Amazon in a few more days. This one is definitely going on my bookshelf.