Deleted Scene from My Father's Son: 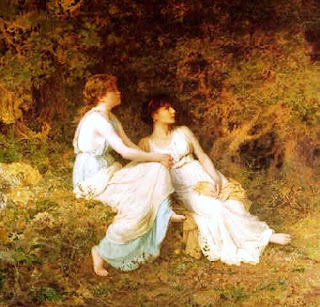 “Oh, Sandy!  Come see!  Come see!”
Sandy turned from where she buttoned Chloe’s frock, having completed her markings on the new silk gown.  She merely looked at Zoe, surprised to see her serene sister all aflutter, but she infected Chloe immediately.  ”Oh, hurry, Sandy.  I want to see.”
“See what?” Sandy wondered.
“Just come see,” Zoe insisted.  “Come to the stables.”
Dragged by both girls, Sandy hurried down the back stairs and outside, after having slipped on her clogs at the back door.  She laughed and teased the girls with pause and delay, but when they rounded the stables, she stopped short in earnest.  She saw before her Paris sliding off the back of the most marvelous hunter she had ever beheld, lively, high-bred and surely more expensive than her father could ever afford.  Yet, there he stood, with Paris patting his head and holding his bridle, his pleasure outstripped only by the sensibilities his father’s faith engendered.
Nothing more bespoke Mr. Sterling’s pride in his son than that horse.  She did not require sight of him standing hard by with a look of supreme satisfaction on his face to know it.
However, the third gentleman surprised her.  Sandy had never before seen the man in the neighborhood, but at first sight, she felt an air of familiarity about him.  Perhaps the age of Merit— probably the age of Merit—he was taller and broader.  He wore his dark hair so long and unruly it taunted her, and she fought back the urge to go comb it.  Even so, he had an intensity of manner which radiated from him, even as he leisurely stood back, away, fairly in the shadows of the stable, as if he wished to absent himself from the family scene.  And yet, his look of satisfaction exceeded her father’s own, and Paris could not help glancing to him now and again to assure himself the gentleman yet remained.
Standing there in her garden clogs, in an old frock professing it had seen better days, her work apron so stuck with pins she appeared a porcupine, and her hair hanging long and loose, only drawn back from her face and held with a ribbon, she colored at the very thought of being seen in such a state, especially by that elevated gentleman, and stepped back.

“Is he not beautiful, Sandy?” Zoe chirped, causing the horse to skitter and dance and all three men to turn to the source of the disturbance.  As they did, Sandy met the stranger’s eye, himself as surprised as she to be so met.  However, his gaze, intimate and possessive, captured her such that she could not escape.  She flushed to her ears a florid red but could not look away.
The next moment, he recalled himself, released her, and retreated further into the shadows.  As much as Sandy could not explain it, she felt he had just slammed shut the door to his soul through which she had inadvertently stumbled.  Knowing it, she attempted to get away, but Paris was too quick and dragged her forward to admire the gift.  She attempted to communicate her apprehensions due to her casual attire, but Paris refused to understand.  He would not release her until she had inspected his horse.

Paris smiled and watched his sister, knowing she could not resist reaching out to the animal, which she could not.  The high-spirited beast pranced and strained at his bridle, but Sandy patted him, murmured a few words, and he quieted.  “Did I not say?” Paris challenged the stranger.  “You would not believe me.”
“I said I should like to see it happen,” the man argued.  His accents professing the significant elevation of his birth, his voice suited the rest of him: deep, enigmatic, and strangely disconcerting.  Sandy ducked behind the animal, out of the man’s line of sight, for she felt the intensity of his eyes boring into her, as if he peered into her soul.  “What is his name?” she asked to turn the subject from herself.
“Aeolus,” Paris pronounced proudly.  “He runs like the wind.  Should you like to try him?”
“No,” Sandy insisted, backing away.  “Not now.  I need my saddle.”
Paris persisted.  “Pshaw,” he inveighed.  “When has that ever stopped you?”  Despite her deepening color and continued protests, he took her about the waist as if he meant to toss her up onto the back of the horse.
“Son,” Mr. Sterling at last intervened.  “Perhaps you should introduce your sister to our guest.”
Still in possession of Sandy, Paris paused, looked to his father, then to his friend, and a grin spread over his face, until he laughed outright and propelled the lady toward the stranger.
“What has gotten in to you?” Sandy demanded, growing concerned.
Paris just laughed at himself all the more.  However, as the gentleman stepped up to meet them, he sobered.  “Sandy, may I introduce Mr. Durant.  Mr. Durant, my sister, Cassandra Elizabeth Mirabelle Sterling.”  Sandy curtsied quite properly and colored more still.  Mr. Durant bobbed his head.  Paris thought to warm the situation.  “Mr. Durant—”
“I breed horses, miss,” the man interrupted.  “It is a sort of hobby in which I indulge myself.”
“I have known Durant for some time,” Mr. Sterling explained.  “I gave him the commission to find a mount to suit Paris.  The road horse he has been using to ride with you no longer serves.”
“He brought Aeolus from his own stables,” Paris felt it necessary to embellish.  “My father sent Roger, but Durant brought him up from Shropshire personally.”  Mr. Durant eyed the boy, rather annoyed with the revelation.
“The horse is spirited,” Mr. Durant answered.  “I trusted him to none else.”
“You pay my brother a great honor, sir,” Sandy answered.  The gentleman’s need to explain himself gave her pause.  “I thank you.”
"I understood your brother’s birthday to be soon.  The errand was in my way.  It was no trouble.”  Sandy smiled but said nothing, and the man stepped away.  He glanced to Roger, who loitered the proper distance from the gentlemen and watched him closely, then disappeared around the corner.  The next moment he led into view a great black gelding of at least eighteen hands, and both horses skittered and pranced, their ears laid back as they eyed one another warily.

“Galahad,” Mr. Durant intoned severely as he quickly took the monster in hand.  Another moment and he brought the gelding under control.  He glanced to the second horse, determined to do the same, only to find the beast fairly purring as he nuzzled the lady who held his bridal.  Sandy could not quite say what caused her to glance at him—to assure herself the brute was calmed, surely—but she again met his gaze and read all the same sensibilities he had first revealed in his eyes, but intensified.  She hated that he caused her to flush so, but she could not seem to help it.  The best she could manage was to duck her head and absorb herself in the horse.
His features again under his control, Mr. Durant took Mr. Sterling’s hand and shook it cordially.  “He is not a lady’s mount,” he warned Paris as he turned to him.  “Have a care. . . .  Neither let her ruin him.”
Paris grinned at the man and saluted, with which he was met with a scowl.  “Miss Cassandra,” Mr. Durant intoned, again nodding his head to the lady.  Sandy could not bring herself to respond.  He then mounted the great black who perfectly suited his master.  She could not imagine Mr. Durant riding anything smaller.
“Zeus!” the gentleman commanded, then whistled sharply.  He wheeled his mount and rode away, and as he went an immense Great Dane appeared and fell in at his side.  Sandy wondered if anything about the man was average.  From the manner he rode that horse, in command and control as the beast danced and pranced down the drive, she very much doubted it.  Once past the gate, he gave the horse his head, they were off like a shot, and Sandy could not help but watch until he vanished from sight.
“La,” Julia murmured from where Chloe and Zoe had paused, well away from the horses’ hooves.  “Who was that?”
Sandy could provide no answer.  Entirely undone, she turned and ran into the house.