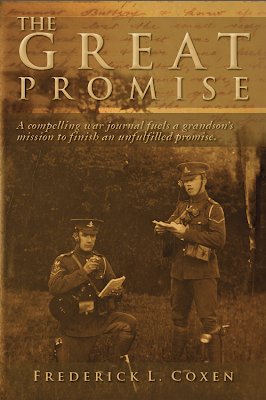 Last week, I reviewed The Great Promise by Frederick L. and Frederick G. Coxen, a grandson transcribing and editing his grandfather's World War I journal. The book is powerful and thought-provoking.  You can read my review here.  Rick also writes an interesting blog about his experiences getting this book to print.

I thought it appropriate that on that one day a year when we celebrate this nation's independence and give thanks for the men and women who fought and died to gain and retain it, that I share the first installment of my interview with Rick.  We will never stop needing reminders of the cost of the freedoms we enjoy.  Frederick L. Coxen was British who emigrated to the United States when the damage his lungs suffered due to toxic gases in the war forced him out of his homeland.  His sons went on to fight for the USA in the Second World War.  The Coxen family is just one of innumerable to whom we indebted.


[Note:  this section actually includes the last few questions I asked, but I thought it important to include them today of all days.]

About Frederick G. Coxen and war:

Penny: Your grandfather was a fantastic writer.  I think perhaps the most powerful in the book is the letter he wrote circ. 1945 during World War II.  There's some heavy subtext going on there: the horrors of war, his frustration with the war, the agony of his experiences from which he continues to suffer, the futility of fighting if it solves nothing (which WWI did not), his anger with those who concern themselves more with their own comforts than with the very real needs of the soldiers fighting and dying for them.  I have to quote:


The question of "Why and for what did my old pals give their lives?" is still unanswered.  May God grant that World War Two mold a different world than did World War One.  We must see to it, or World War Three will develop.  The irony of the thought of world war defined by numerals!

Channel your grandfather a minute for me.  If he were here, now, what would he say?  Would he believe we had accomplished anything in the one hundred years since so many fought and died in the futility of Flanders?  Have we learned anything?  Have we averted anything?  Do you think he would be a hawk or a dove in 2012?


Rick:  What I found interesting is what he wrote is as true today as it was when it was written!
Interesting question! After spending so much time with his thoughts and feelings, I believe it would depend on the reason. Even though he lived through the horrors of war and saw absolutely no benefit to justify the loss of millions of men, he would support a war like he did in WWII because the Germans and Japanese went against the principles he believed in.
Would he be for or against the past wars we were involved in, like Vietnam, Desert Storm and so on. I believe he would be against them. Like WWI, Vietnam didn’t accomplish a darn thing to justify the loss of lives.

Penny:  He wrote of atrocities one scarcely hears of in official histories: troops being taken out by friendly fire, wounded soldiers shot by their own officers to put them out of their misery, and both sides allowing no quarter, executing unarmed prisoners, and crucifying men with bayonets jammed into walls.


The cruel and barbaric happenings around this period would fill a book with horrors of all descriptions.  The merciless style of war created by the Germans carried over to their enemy.  The centuries that it has taken to develop the meaning behind the word "civilized" has only taken a couple of years to reduce to "barbaric".

What would you, as the author/editor, have every reader take away from your grandfather's experience?


Rick:  What I wanted to accomplish was to educate readers about what happened in World War One. If I asked you, prior to reading the book, what do you know about WWI. Perhaps you might know more than most because you are an avid reader and perhaps read different WWI books. But for most Americans we know very little about the war. I know it is true with me and definitely true for my children. To them it is a war that came before WWDII.
In 2014 the world will mark the hundredth anniversary of World War One. I hope every American would read this book to understand the sacrifices countries made to maintain the freedoms they all believe in.
World War one was tactically immature in comparison to the technical advancement in weapons. Armies still had cavalry that charged machine guns with swards. The soldiers were brave but the military commanders were unwilling to recognize or change and thus sent millions to their death.