I caught the last fifteen minutes of the last installment of Season 2 the BBC's Sherlock on PBS last night and was so blown away, I had to write about it.  Luckily, PBS has all three episodes online until the 20th of June, so I'm catching up on what I've missed.

My husband has always loved and loves to own Sherlock Holmes videos.  Which Sherlock?  Take your pick.  So, a few years back, I picked up this book off a bargain table at my local Barnes & Noble.  It sat on the shelf unread.

Then, an elderly friend of mine fell and ended up in a rehab facility for several months.  The lady has macular degeneration and can see very little, so a few times a week I would visit her and read to her.  She loves murder mysteries, and so we read (aloud) this book from cover to cover—all 752 pages of it.

Honestly, by the time she was released from rehab, I was good and ready for that book to end, and I came to think precious little of Sir Arthur Conan Doyle.  I found his narrative pedantic, his plots thin and predictable (to say nothing of redundant), and Sherlock's reputation for amazing deductive powers overblown.  But then, we're rather jaded, are we not—we of the CSI generation?

And then there are the productions.  Although some actors have been critically acclaimed, I could never warm up to the TV series or movies in any iteration of the stories.  A strong portrayal could never be enough if the script provides no challenge.  (Don't even get me started on the various actors' portrayal of Dr. Watson).

Sherlock Holmes (2009) starring Robert Downey, Jr., and Jude Law, got my attention, however.  True, Downey's rapid-fire marble-mouthed delivery of the dialog took two viewings of the movie before I even began to understand him (thank heavens for subtitles!), but I especially appreciated the way Dr. Watson at last got the respect he deserved.  Sir Arthur never wrote him as the bumbling idiot so often portrayed, and why would Holmes require such a sycophant anyway?  He's all about facts and observation and deduction.  Emotion creates distraction, and insecurity never plagued Sherlock Holmes, one would think.  He's too arrogant to entertain the notion.

So, this movie earned my respect, despite its far-fetched reliance on 21st century technology plopped down in a 19th century world.  (I love it when movies do that—not.  Wouldn't it be far more clever to actually make the technology available at the time work for the characters?  But, that's a different post altogether).

Sherlock Holmes: A Game of Shadows (2011) remains on my to-see list.  Despite the anachronisms and Robert Downey, Jr.'s manic delivery, one simply cannot turn up one's nose at Jude Law. 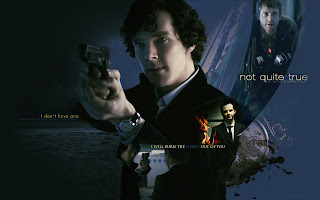 Purests may take issue with the pronouncement, but when the BBC took up the Sherlock Holmes challenge, they dropped all pretenses at faux historical accuracy.  Set in contemporary London, Sherlock is all over a 21st century creature.  He uses and battles the technologies at hand.  The issues and dangers are familiar.  Sherlock's done his bit in rehab for a coke habit (smoking cessation his current bugaboo), brother Mycroft "is the British government", and Captain John Watson's experience in Afghanistan make him an essential ally.  (He's handy with a gun, soldier-tough and helpful when rank has to be pulled.)  Watson blogs to support his sleuthing habit, rather than publish in periodicals as in the books.  The pair of sleuths are commonly mistaken for a "couple", one of Watson's pet peeves.  It seems to hinder his action with the ladies.  Go fig.


Government Suit:  You're not so tall, are you?
Sherlock:  You know.  The Internet.  And it helps to have a short friend.

Creators Mark Gatiss (who plays Mycroft Holmes) and Steven Moffatt seem to have been channeling Sir Arthur Conan Doyle (or at least, what he was trying to be) when they came up with this series.  More remarkably, despite their seeming defiance, they use and remain true to some of Sir Arthur's most famous Sherlock stories.  They are adapted to the sophistication of the audience, of course, but the plots are dead on in essentials.  Hollywood's theatrical releases can't say that.


Sherlock:  [flips up his coat collar and strides confidently to the Land Rover]
Holmes:  Can we just—just not to that this time, please.
Sherlock:  Do what?
Holmes:  That thing with the cheek bones and standing up your collar and being all cool.
Sherlock:  I don't do that.
Holmes:  Yes, you do.

Incredibly smart, witty, fast-paced and stylish, they put the tools they require in the hands of Benedict Cumberbatch and Martin Freeman, then provide a supporting cast of equal caliber, fantastic production values, and a soundtrack carefully calculated to propel the action forward, build suspense, or jerk the tears.  The effect electrifies.  Cumberbatch is brilliantly annoying, egocentric, arrogant and vulnerable.  Freeman is fabulous as the human and humane part of the duo, the tolerant but troubled Dr. Watson.

Sidebar:  Cumberbatch (until now) has never really caught my eye, but I've been a fan of Martin Freeman ever since his turn as Arthur Dent in Hitchiker's Guide to the Galaxy.  I love character actors—those who subsume their own identities to the roles they play.


Eileen Adler:  (cooing)  Ooo.  I could cut my hand slapping those cheekbones.  Would you like me to try? 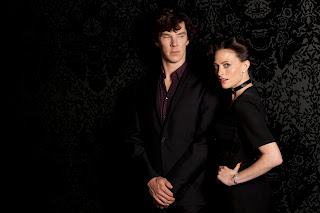 The villains are equally brilliant, with Lara Pulver as "The Woman" Eileen Adler, femme fatale and the only woman to ever rattle Sherlock.  She and Cumberbatch positively sizzle on screen, with their only physical contact a touch on the inside of the wrist. Bottom line:  Buy the DVDs.  Watch the Hound of the Baskervilles below while you can.  (There's no nudity in this one).

Watch Sherlock: The Hounds of Baskerville on PBS. See more from Masterpiece.

Is this review too gushy? Watch all three episodes of Season 2 and then come back and tell me what you think.

This review was not too gushy! It is all deserved! I'm a huge fan of the new series and I can't say enough about how each episode just gets better and better. I was so happy to read your thoughts on the Sherlock Holmes stories too, of which I've never been particularly fond of either. Glad to not be alone. :) BTW probably spellcheck or something changed Cumberbatch to Cumberpatch. Also I'm a new follower thorough Linky. :)
Charlene
http://bookishwhimsy.blogspot.com/

Thanks, Charlene, especially for the correction of Benedict's last name. I'm terrible at them. Glad to find a kindred spirit out there. I really like your blog and am now following on Linky, GFC and Twitter. I look forward to reading your reviews. PF

Not too gushy at all. Spot on! In fact, almost as good as watching the show. Thanks!

Not too gushy at all. Spot on! In fact, almost as good as watching the show. Thanks!

I loved 'A Game of Shadows'. Jared Harris made an excellent Moriarty.

Check out my review .