Two Down, One to Go 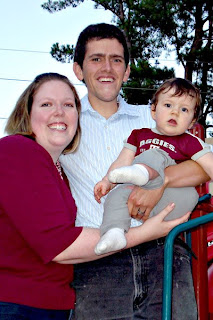 Wednesday marked another milestone for my family.  My #2 son left college campuses behind him for good, packed up his family and set out into the real world.  With his Master's in mechanical engineering in hand, in another couple of weeks he'll start work with his new employer, Samsung, in a bedroom community of Austin, Texas.

They moved only about 102 miles from their apartment in College Station, but in their change in circumstances, they're moving to the other side of the moon.  Instead of starving students relying on scholarships and student loans to keep body and soul together as they have done for the past four years of their married life, a well-paying job promises comfort, security, and elimination of their debt.  Instead of a two-bedroom apartment growing increasingly smaller the larger their toddler and two cats grow, they are renting a new-ish, clean and well-maintained four-bedroom home with 2½ baths and a two-car garage in a nice neighborhood.  Filling up those rooms with furniture will take some time, but they've already made their first installment with a new flat-pack dining table and chairs.

I spent Wednesday doing the Mom thing.  With my niece, Andi, keeping me company, I drove the 84 miles to College Station, helped keep Dustin out of trouble while everyone else packed up the truck, then bounced around in the cab of the U-Haul D2 drove as we made the 102-mile trip to their new digs in Austin.

Then, the truck unloaded, lunch ingested and a bit of a rest snatched, I followed the truck back to College Station driving their little red Toyota, where D2 turned in the truck and Andi and I finally headed back down the road to Houston while he returned to his wife and son.  Twelve hours, 375 miles and one sore pedal foot later, Andi and I pulled into our own driveway good and ready to hit the hay.

With D2 and Lynda's embarkation into the real world—finished with his formal education, gainfully employed, settled in a town that is not a temporary stop-over on their way to somewhere else—now only Paul, our youngest and in law school, remains unsettled.

Although Adam graduated in 2009, he and Ariane have been established much longer.  Adam hacked his way through college one night class at a time, and by the time he graduated, he had literally worked his way from the stock room to upper management and a sound financial footing.  They built their first house in 2008.  I guess I feel like they made the leap into the big wide world a couple of years previous to that when they moved out of their apartment just a mile down the road from us to across town and an hour's drive away so Adam could spend more time with his family and less time commuting.

It's an interesting feeling, seeing your children succeed.  My boys—my men—probably wouldn't understand it since they've all been independent since they started university.  They've paid their own way, made their own decisions and, to a man, very quickly found an eternal companion to share the journey with them after their return from their missions.  To be blunt, what's Mom got to do with it?

Nothing.  Everything.  To watch my children succeed, accomplish their goals and set even higher marks for themselves, to know they've fulfilled another of my dreams for them gives me a sense of unspeakable satisfaction and comfort and relief.  Like removing the training wheels from a bike because they need them no longer—or, more accurately, like when he comes in from play one day and proudly informs you he has removed the training wheels himself.

But primarily, I feel gratitude.  And hope.  And, when I admit it to myself, loss.  They don't need us any longer.  They're gone.  No.  Really.  They mean it this time.  They won't be back.

Each milestone our sons pass makes us more irrevocably empty-nesters and I cannot escape that scalp-prickling sensation of time creeping up from behind, its chill breath assaulting the back of my neck and making me squirm. Just how much longer will it be before we are completely dependent upon them?  The tables have turned.

Even though we are unaccountably blessed with having our all children within easy driving distance, I feel like the robin in this video.  Where did everybody go?