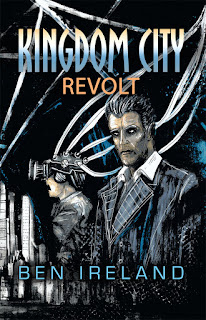 Paul Stevens has survived a terrorist attack, medical experimentation, and an attempt by the government to “neutralize” their rogue subjects. However, his escape cost him his wife, and now he battles to overthrow Brian Shuman, the dictator responsible for her death. With the kidnapping of his daughter and the disappearance of his son, he must choose between saving what may remain of his family or the fledgling rebellion on the verge of collapse.

People can surprise you. Case in point: at Xchyler Publishing, we conduct short story contests anonymously. That means none of the judges know who have written the submissions they're adjudicating. Thus, it came as quite a surprise to learn that Ben Ireland had written "Kissed a Snake," ultimately a winner that was included in A DASH OF MADNESS: A THRILLER ANTHOLOGY, published in 2013. You see, the Ben Ireland I knew was a quiet, mild-mannered young man who never talked much, who spent a great deal of time chasing after his two young children in the foyer at the church we both attended. He was the youth who graduated high school with my son shortly after his family moved from Australia. Squeaky clean. 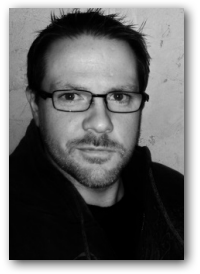 But, there on the screen before me flickered a gritty tale of growing up broken, sons permanently damaged by the sins of the fathers (and mothers), a desperate attempt to put things right, and a twist ending that makes my stomach churn just thinking about it, even now. How could Ben Ireland write that?

But, I shouldn't have been surprised, because I'm a writer, and I know the best writers are like actors. They have the ability to project themselves into the souls of their creations, as opposed to onto them. Not every character is an iteration of themselves, contrary to popular belief. They have enough imagination to step outside their own skin and see beyond the fish bowls of their insular existence.  Once I read it, I knew we needed Ben's story, and he was more than willing to put the work into it to get it ready for publication.

After we finished that project, as we have done with many of our other short story authors, I asked Ben to show me his work in progress. (Every author has a WIP, even if it's just bouncing around in their head). I put the manuscript he showed me into the oh-so-capable hands of Jessica Shen, and KINGDOM CITY: RESURRECTION hit the shelves in February of 2014. Two years, one wedding (Jessica's), two more kids (Ben's & Trish's), one cross-country relocation, and Luke Spooner signing on to illustrate the covers later, and KINGDOM CITY: REVOLT is finally ready for publication. It's been a long, at times harrowing process for the whole team, but the end result has definitely been worth the effort.

KCR2 is anything but a sophomore slump for Ben. Not only has his writing blossomed, but Ms. Fassler (nee Shen) has been even more demanding than she was the first time around to ensure Ben's story achieved maximum impact. After McKenna Gardner finished the line editing, Ben wasn't out of the woods yet. It then came to me for final approval, and, of course, I made the process even longer and more grueling. I think Ben came away feeling bruised and battered (justifiably), but KCR2 is a book we'd proudly put up against anything in the genre. 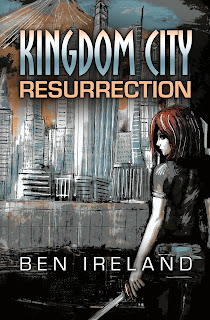 The story of KINGDOM CITY and the Stevens family is unlike any story I've read. It's a story about a whole family, not just a couple of teenagers set out on an orphan quest. There are very real, very wrenching consequences to the decisions they make, with moral implications besetting every one. They deal with choices of the past that will forever haunt them, and struggle to ensure they have a future at all. Themes of honor, loyalty, sacrifice, and duty are strong, but Mr. Ireland demands we ask ourselves where are we allowing technology and science to take us? How much of our humanity are we willing to surrender (or rip from others), all in the name of profit or science?

Another true confession: as I was editing, there were times when I had to set this manuscript aside because it became too intense. There are battles with heavy body counts. There are emotionally wrenching scenes. Sometimes I needed to step away because of the knot in my own stomach, but, for me, that's the mark of exceptional writing. When an author can get such visceral reactions from a reader, when he immerses them so much into the lives of his characters that their own empathy is overwhelming, that's the mark of good storytelling.

In a relaxed but intelligent prose, Ben Ireland continues the story of Autumn and Paul Stevens, and their two teen children, Amber and Mike, in KINGDOM CITY: REVOLT. Recovering from the tumultuous end of RESURRECTION, Paul, the former chief of police, finds himself the leader of the revolt against the government that has turned its citizens into guinea pigs as it continues its experimentation in cybernetics. This isn't a quiet and gentle book, by any means, the body count is high, and emotional situations can be equally intense. There is an occasional spurt of vulgarity, but nothing beyond a PG-13 rating. Some sensitive readers may find the KINGDOM CITY series too demanding, but the last thing anyone will find it is boring.

But, the action feels like the backdrop against which this story plays out. As well-written as the battle scenes are, it is Ben's characters that compel the reader to devour this book. His protagonists are complex and well-realized. Ben avoids the trap of creating flat, comic-book villains, and the antagonists are equally well-rounded. Sometimes, tough decisions must be made and not everything is black and white. Sometimes, we make the right choices for the wrong reasons. Often, despite our good intentions, our motivations are purely self-serving and not noble at all. Ben doesn't flinch when he examines this. Not all the good guys are on the side of the insurgents, and not all the bad guys work for the government, which, again, is true to life.

Although parents should read these books before allowing children under twelve free reign, and the focus is more adult- than young-adult-oriented, people who enjoyed The Hunger Games or the Divergent series would enjoy these books.

Don't forget to enter our KINGDOM CITY: REVOLT blog tour Rafflecopter give-away below, on the blogs above, on our Facebook page, or on Rafflecopter, with daily chances to win!

Kingdom City: Revolt is my favorite in the series so far. It's actioned packed and keeps you on the edge of your seat the whole time :) I love the cyborgs and the fight scenes are awesome :)

I totally agree. Revolt is my favorite thus far as well.

Thank you for the good book .