This is the first in my "Note To Self" seriesor Lessons Robert Jordan Taught Me.  The advantage of reading the same author through a large body of work, particularly marathon style, is that their writing style, habits, strengths, and idiosyncrasies all become very apparent.  I am currently about 20% through Knife of Dreams, Book 11 of The Wheel of Time Series.  That's more than 8,461 pages of content (yes, I did the math).  You can learn a lot about an author reading that much of their work, especially if you're hyper-critical, like me.

So, brilliant me that I am, I'm sharing a few of my observations. And, since I would never wish to malign the revered Mr. Jordan who is not only published and very popular but, well, dead, I'll use examples from my own writing to illustrate the point.  I have to say here that I greatly admire Robert Jordan.  He died with his boots on, as it were, a worthy goal to strive for.


Writing for me is creating a world.  It starts out a tiny microcosm as first one and then another character is developed, as they interact with each other and as I, as a writer, get to know them.  (I don't develop characters so much as grow acquainted with who they are).  Then, as they move through the plot, they interact with more characters who in turn start to reveal their personalities, and with them their back stories, in an ever-expanding spiral. 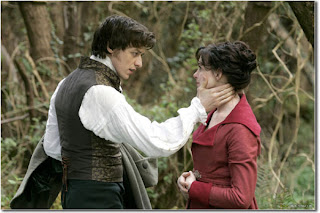 That isn't necessarily a bad thing.  For instance, take Loyal Partridge, AKA Colonel Quayle.  He started out as nothing more than a witness in a trial, a nameless faceless entity lurking in the shadows, but then, how could he be in such close proximity to my title character without being affected by her?  Over the course of the years, Colonel Quayle has become a primary character in my story, a best friend, a courageous soldier, a noble soul with a tormented past, and the foil for our hero in a poignant love triangle.  Getting to know Loyal turned my sad little sequel to Pride and Prejudice into a multi-generational tale on a grand scale, one which can stand on its own without being propped up by another author's success.  (At least, that's the hope).

The danger with character creep is that too often, one loses sight of the main characters.  Wandering down interesting side-streets and alley ways, while rich in texture and atmosphere, can cause both author and reader to forget exactly where they were heading.  Some authors who do this with brazen nonchalance are great sequel writers, such as Alexandre Dumas, Charles Dickens, Herman Melville, and James Fenimore Cooper.


I have found that the surest guard against this is to maintain anonymity.  I try not to give tertiary characters names, because to do that I have to figure out who they are and why they are there, which inevitably opens up their own back story and I start to liking them.  Case in point:  Devon Pevensy.

Devon Pevensy is the side-kick of a side-kick, the faithful friend of one of our hero's minions.  Well, Archer Arlington is more than a minion, but as he struggles away earning his articles as a solicitor, alone and isolated from the tribulations of his friends, he has to have someone to talk to.  Thus, Devon Pevensy was born. . . and, thus Devon Pevensy grew until I found myself writing him into scenes where he affected nothing, and even casting about for a wife for him and considering changing up my plot to accommodate him.   While that worked for Loyal, by the time Devon came along, he was just one more extra in a very large casting call.  I still like him and glad he keeps Archer company, but poor Devon is doomed to remain uncredited.  He is a distraction, plain and simple. My Regency world of My Father's Son is large, with easily as many characters as The Wheel of Time world.  However, I decided a while back that my 'sequels', instead of being told from our hero's point of view, will be told from the perspective of other characters.  As the character Iris Simkins says in the movie, The Holiday, a person should be the leading lady of their own story.

I am emulating another favorite author, Orson Scott Card, who, in Ender's Shadow, wrote a parallel sequel to Ender's Game, which was the tale of Ender's side-kick, Bean.  OSC does a fabulous job of this, and I believe this strategy is far less confusing than trying to track everyone all at once.  Truth be told, one of the biggest reasons I've rewritten this, or started writing this, or given up on writing this so many times is because of the complexity.

The Famous Mrs. Darcy became My Father's Son because (thanks to my brother) I finally knew which tale I wanted to tell and how I wanted to tell it.*  Limiting the information to the really relevant is a challenge, but I know the telling will ultimately benefit.  This is Piper Durant's story no matter the complexity of the external forces affecting him.  He must stay in sharp relief for  the very reasons that make keeping him from melding into the background so difficult.  (I still think The Famous Mrs. Darcy is a great title for a sequel, though. Too bad I no longer want to write it.)

I hope I write about Devon Pevensy some day.  With a name like that, he deserves top billing.  Unfortunately, he has to queue up behind Archer Arlington, Loyal Partridge, Honor Thorogood and Piper Durant.


*  Had I pressed forward with The Famous Mrs. Darcy, Austenophiles would have lynched me when they saw what I had done to Ms. Austen's characters.  Piper Durant and Cassandra Sterling are their own selves.

Hi Penny, The article about the neverending 'Sequel...Sequel' is very good info. I may be in danger of that with Witch Island. I don't want it to go on forever and yet, I can't bring myself to forget them and not let them live. Something feels unfinished about that family.