Note To Self: Ambiance, Ambivalence or Ambush?

"My dear fellow, there are in fact only so many notes the ear can hear in the course of an evening."  Emperor Joseph to Mozart in Amadeus (Orion Pictures 1984) 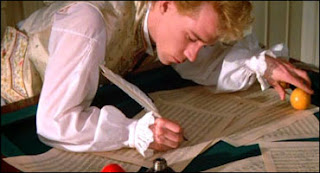 The same can be said of words.

While this particular post is part of the "Lessons Robert Jordan Taught Me" series, my reading of the Wheel of Time has primarily reinforced what I've already learned on my own: sometimes, there is just too much information.

I first started writing The Famous Mrs. Darcy out of sheer boredom.  The problem was, I didn't really have a plot in my head, so I decided I would make up for Miss Austen's lack of contemporary detail and historicity.  I would make my story about the difficulty Lizzie had adjusting to her new life and Mr. Darcy's unyielding family and fill up my tome with lots of luscious locales, grand palaces and fancy clothes beautifully illustrated in a vivid pallet of words.  The end result was a disaster.  The atmosphere was so thick, you had to use a machete to hack your way through it.

At the tender age of eighteen, my #2 son accomplished the heroic feat of reading the entire draft—the one and only person who ever made their way past the first two chapters.  He had the misfortune of being trapped at home without a social life and being interested in writing himself.  I think he had the mistaken impression that he might learn something from me—which, I suppose he did, in a negative, why-the-heck-did-I-agree-to-this sort of way.  Either that, or he was humoring me.  They do that.  A lot.  Or, he simply couldn't find a way out of it.  Or, all of the above.

His too kind, sublimely diplomatic critique delivered after much hemming and hawing was this:  "All they do is run around crying, changing clothes, and giving each other gifts."  For about 250,000 words.

Poor D2.  Little wonder he lit out of here the day after his high school graduation and never looked back.  (He is a fabulous writer, by the way.) 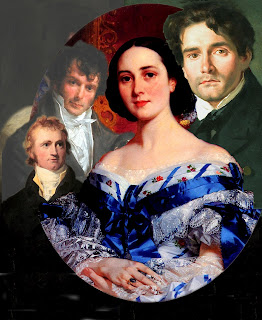 I have spent a lot of time creating the world through which my characters move—and not just with words.  I have floor plans and elevation drawings, sketches of clothing and paintings and houses that are as much characters as the people, drawings of scenes I have written, pages and pages and pages of fictitious pedigree charts.  I dug through endless museum and art sites searching out the perfect portraits of my characters.  I have a Google Earth file filled with plot locales on Great Britain, throughout Europe, and in the Americas.  I even learned how to use Google Sketch-Up to 'get real' with the house that quite nearly spells Mrs. Darcy's doom.  It's quite fun, actually, especially if you're trying to be busy and yet not write a word.  Kind of like blogging. 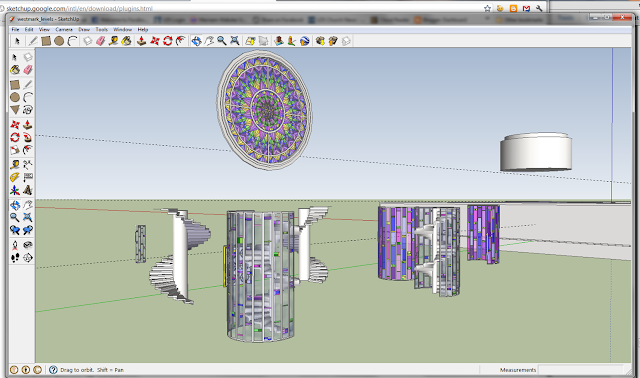 Precious little of it will ever make it into the pages of my books.

As fabulously detailed as all this stuff is, it's too easy for it to get in the way of what is important, like the plot, the character development, the dialog, the action.  When an evil Aes Sedai of the Black Ajah jumps out wielding a sa'angreal and flinging balefire, I really don't care if she's wearing red silk slashed with black with puffy sleeves and divided skirts for riding, finished off with red high-heel boots.  I want to see her get taken down!  NOW!

Mr. Jordan does a wonderful job of creating Rand al'Thor's world, with the various ethnicities, terrains, locales and architectural styles, the fashions they wear and the differences in their cultures and governments.  It's all fabulous.  However, after ten books or so, enough already.  If you keep harping on all that minutiae, you're beating a dead horse. . . and insulting your readers' intelligence.

There's character development and atmosphere development which is all well and good, but at a certain point, you need to give your readers the benefit of the doubt and have faith that you've adequately created the world in which your plot must be the driving force.  Wave your magic wand, tie off the weaves, and move on.

Everything else is just too many notes.

Sometimes Fraser will do the same thing with his writings.... I nicely tell him, "quit with the descriptions and let's get back to the plot..." lol

And yet Jordan would throw in needed information, so it's no necessarily safe to skip parts. Ugh! I

My daughter and her high school friend, Tiffany, decided to write a book together. N's part was pretty straight forward. T's, however, was nothing but descriptions of dresses and locales and FOOD.

At one point, T had the assemblage sit down for a marvelous repast of...individual piglet. That phrase set of a hailstorm of ribbing and laughter every single time it was uttered. I can still bring up grins saying it. In fact, my brain set those words to the stupid music from an old Mario Bros video game and that plays through my head every time.

Doh. I should have previewed because it's OFF instead of OF.

Very nice Penny! I want you to know I have read quite a bit of your drafts and am glad you came to this conclusion! You are a very talented writer.
I really like the last you sent me. Sorry if I never gave you a response.