As I mentioned in my last post here, my #2 son, Dallas II, is a writer.  (When writing, for disambiguation, I refer to him as D2). He was the editor of his high school newspaper, The Bearchat, his senior year, and penned a widely followed and eagerly anticipated humor column in it for two years.

I, of course, am his #1 fan.  I claim this distinction over his wife, Lynda, because I have been cheering for and laughing with him the longest.  Even so, it delighted me to learn that  he found an eternal companion who laughs at his (admittedly occasionally obscure) jokes as much as I do.

D2 has just graduated from Texas A&M with a master's degree in mechanical engineering.  He, his wife, and their 15-month-old son will be moving to Austin, Texas, in a few weeks, where he will begin making microchips at Samsung.

While I hope I can claim some of the credit for his love of reading, I blame him at least partially for my eclectic taste.  Through him, I discovered authors such as Orson Scott Card (The Ender's Saga), Robert Jordan (The Wheel of Time), Brian Jacques (Redwall), J.K. Rowling (Harry Potter), and J.R.R. Tolkien (Lord of the Rings).  He writes engrossing speculative fiction with a delightfully wry voice.

D2 is currently on vacation, and I thought it would be a perfect time to hit him up a guest post for this blog.  I guess he's bored because the following was his response to my query.  Enjoy. 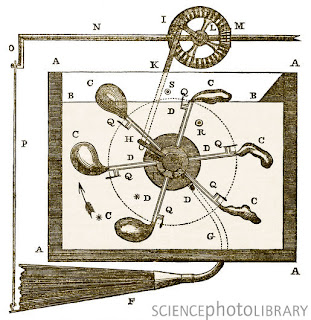 Efficiency is defined as the desired result divided by the required input. When these two things can be quantified with the same units (typically energy), efficiency can be described as a percentage from 0 to 100 % or as a decimal from 0 to 1.

I think about my daily life in terms of maximizing efficiency, with mixed results. For instance, when I'm riding my bicycle and I notice or think I notice that the chain is a little dry, I imagine that the energy which is supposed to be exiting my legs muscles via the pedals, running along the chain, around the sprocket and through the wheel into the ground is being partly lost. I imagine I can see it as red mists of loss wafting off that rusty chain, wastefully increasing entropy and failing to help move me toward my destination. It doesn't take long before the WD-40 comes out of storage.

Other times an efficiency mentality can be frustrating. My wife used to—the reason for the tense will soon become apparent—ask me simply to sit by her when she was feeling sick or down. No, what she'd actually ask me was to "be with" her. So I would. I would sit by her on the couch and "be." Then my brain would start to itch.

How, I would wonder, is this even possible? In exchange for me doing nothing, my wife's comfort will be gained. Now, I know I'm not covering ground that hasn't been picked clean by countless authors and social scientists who've studied and written about the differences between men and women, but I think the efficiency mindset adds a new dimension to why I suck at "being" with my wife,

Let's go back to the definition of efficiency. At the top of our fraction we have desired output, in this case, my wife's feeling better. This may not be measurable directly, but there definitely is an observable difference in terms of energy between my comforted wife and my uncomforted wife. There is something, in short, at the top of the fraction. At the bottom, the input required of me is . . . Nothing. Well, nothing beyond what my body would be doing if I were sleeping or watching TV or being anesthetized. That means my wife, and by extension me, are getting something for nothing.

"It's not nothing," say the economists. "Your required input is giving up whatever else you were going to do."

"The energy comes from her," say the chemists, "You're just acting as a catalyst."

Baloney, I say. Nothing is free, and all real processes require more energy than they give up. So most people aren't helping. To the economist I say, well what if I would have watched TV? That's still nothing. To the chemist I say . . . chemistry is stupid and you're a fartface.

So there I am, "being" with my wife, and thinking about this zero in my efficiency denominator, watching my result approach infinity when it's impossible for it to be greater than or equal to one, and I'm almost to the point of screaming, "Confound it, woman! There are a million things I can actually do for you, and you're insisting on perpetual motion which is something I've spent several years paying people for the privilege of proving to them that I know how impossible it is. Be with you to make you feel better? What ridiculous magic system is that supposed to be?"