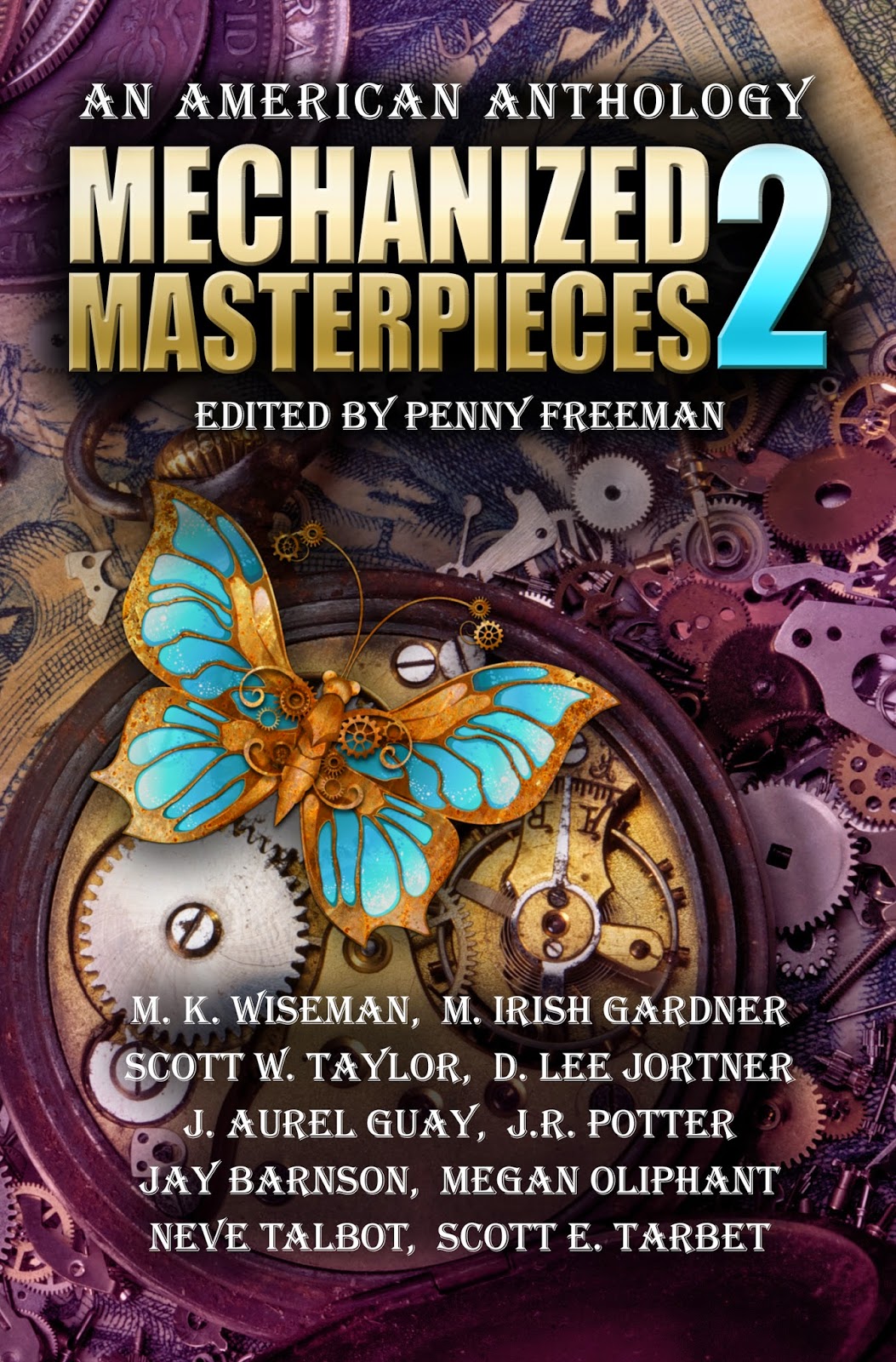 Ride into the Wild West with ten steampunked expansions of classic American tales.

A Princess of Jasoom: An intrepid young researcher reaches for the stars from the Arizona desert, and finds love where she least expects it.

Winged Hope: The widow of a brilliant inventor fights insurmountable odds to see her husband’s dreams realized and save the life of her daughter.

The Van Tassel Legacy: A stranger arrives in Sleepy Hollow to unearth old conspiracies and bring the Van Brunts to justice.

Invested Charm: A mysterious woman doles out justice in Boston society, but who will catch her first: organized crime or the law?

Payoff for Air Pirate Pete: A pair of train-robbing outlaws bite off more than they can chew when they kidnap the son of a railroad bigwig.

Rise of the House of Usher: A mad scientist gains power over life and death at the cost of his family’s sanity, if not their very lives.

The Silver Scams: A fast-talking confidence man ensnares all of Holland in his scheme to eliminate dikes forever . . . for a price.

Nautilus Redux: Captain Nemo’s crew stumble upon an island castaway who claims to be Captain Ahab of the Pequod. Only Moby Dick knows the truth.

Mr. Thornton: Hounded by tragedy and betrayal, a gifted young blacksmith wanders from The Ohio to The Yukon searching for honor, loyalty, and justice.

West End: A heartbroken Theodore Laurence follows the siren song of steam to Jamaica, where love and law collide with explosive results.

Read about all ten of the authors on the title's home page. Today, I'm spotlighting just one.

I have worked with Scott William Taylor for more than three years, his first short story with us being "Little Boiler Girl" in Mechanized Masterpieces: a Steampunk Anthology (Xchyler Publishing, 2013) He won our short story competition a second time with "Split Ends" which appeared in Shades and Shadows: A Paranormal Anthology (Xchyler Publishing, 2013). The inclusion of "Mr. Thornton" in Mechanized Masterpieces 2 ties him at second place for the most stories published in Xchyler anthologies. I have had the pleasure of working with him on all three projects.

Although all three of Scott's Xchyler stories end . . . how do I put this . . . on a downbeat, with a non-"happy" ending, paradoxically, they illuminate the human condition in a warm and empathetic way. Bad things have happened, but hope and faith remain. That takes a great deal of not only skill but insight to accomplish as a writer, and although Scott's persona is as understated as his writing, he pulls this off with great elan.

Scott is also a man of many other talents, including an actor (Bob Cratchet, anyone?), photographer, blogger, podcaster, and family man. He has participated in multiple writing panels at FanX/Salt Lake Comic Con and The Life, the Universe, and Everything Science Fiction/Fantasy Symposium. He recently self-published a collection of anthologies, Speckled, available in paperback and on Kindle.

Like all of the titles I have had the time to review of late, MECHANIZED MASTERPIECES 2: AN AMERICAN ANTHOLOGY (2015) is a Xchyler publication. It is also a follow-up volume to our best-selling anthology, Mechanized Masterpieces. The challenge of expanding classic literature with Steampunk themes has always sparked the imaginations of our readers and writers, and Xchyler authors have long been pestering me to publish a second title. I finally acquiesced when we figured out the slightly different angle to come at it. I didn't want to just do more of the same.

Although unintentional, the majority of titles we explored in MMSA were from British authors. So, for Volume 2, we decided to restrict the classics selection to American literature. We also added one more caveat: this would be an inhouse but anonymous competition. The judges only knew that previously published authors at The X and/or staff members could participate. All other information was withheld. We thought that would make judging easier and less time-consuming. We were wrong.

Our authors had no difficulty whatsoever coming up with Steampunk twists to American classics. For them, their greatest hurdle lay in choosing in which stories to invest their greatest efforts; for the judges, choosing only ten stories. If we had more time and an open calendar, we could easily publish a third volume just on the remaining stories submitted.

All the prep work paid off, however. Editing these fine authors was a breeze, they were all eager and willing to boost their writing to new heights, and I thoroughly enjoyed the experience. Although this volume feels to me like an exercise in indulgence (doing what I love with the people I love), I am also proud of the product. These Xchyler authors gave me their very best.

Princess of Jasoom: J. Aurel Guay is a terrific writer and a fantastic story coach with the rare combination of both analytic and imaginative mind. He represented himself so well with this short story, he has since joined the editorial staff at The X.

Winged Hope: Smart, engaging, suspenseful, and totally unexpected. Expanding a poem? Who thinks of that? The most difficult thing about editing this anthology was getting the authors to leave off the amendments. Megan Oliphant wrote and rewrote this story until she was happy with the final result. I know readers will be as well.

The Van Tassel Legacy: Jay Barnson tops himself with this story; again, imaginative, well-written, and unexpected. That's the beauty of Steampunk. One never knows what they'll find next.

Invested Charm: I admit, M. Irish Gardner had me completely fooled with this story. I absolutely had no idea she wrote it. I believed it came from the same author as "Winged Hope." Like Megan Oliphant and J. Aurel Guay, after winning the competition, she took her story back and pounded it into submission before I ever began editing it. This is a surprising, original, beautifully written work, one that showcases the skills of our senior editor. You've never read anything like it.

Payoff for Air Pirate Pete: A pure delight, plain and simple. As dark as some of our other stories get, D. Lee Jortner brings a breath of fresh air to the work with humor, humanity, irony, and playfulness. It's a favorite among reviewers.

Rise of the House of Usher: I don't like real heavy "horror" stories. I have a fat Complete Works of Edgar Allan Poe sitting on my bookshelf that I couldn't get half through. It's just not my cup of tea. However, I'll read anything J.R. Potter writes and revel in the luxury.

The Silver Scams: Another breath of fresh air from M. K. Wiseman. She and I have worked together on several projects now, and I'm delighted to be the lead editor on her as-yet-unnamed historical fantasy title slated for release later in the year. This prequel to the Hans Brinker story is the perfect introduction to her writing.

Nautilus Redux: The imagination of Scott E. Tarbet never ceases to amaze me. Although "Year of No Foals" is probably my favorite of all his short stories, this comes as a close second. Moby Dick meets 20,000 Leagues Under the Sea. 'Nuff said.

Mr. Thornton: This story is a head-scratcher for some readers because of the plot arc, but, as mentioned above, I believe Scott William Taylor demonstrates a keen understanding of the human condition coupled with some fabulous steampunkery. Not all stories have to be about how everything goes right in life. Sometimes, after dreams die, the rebirth of hope is the real tale to tell.

West End: This took four different editors to beat it into submission after it ballooned into a 30,000-word beast, as the continuation of "Tropic of Cancer" in MMSA. There's a whole lot of story on the cutting room floor, so to speak, and I think it will eventually become a full-fledged novel. Special thanks to Justin Guay, McKenna Gardner, Jessica Shen, and MeriLyn Oblad for helping me cut it down to size for this purpose. Neve Talbot (that's me) couldn't have done it without them.

Again, I don't put star ratings on Amazon or Goodreads for Xchyler titles to keep it fair and honest, but I do think this work deserves five stars, and I know lovers of both classical literature and Steampunk are going to enjoy this work.