Note to Self: Perfect Is Boring

at 7/09/2012 05:34:00 PM
I have a confession.  I have already mentioned that I actually finished my manuscript for The Famous Mrs. Darcy and was in the editorial process before I gave it up as a lost cause.  The truth is, I didn't give up because my writing was terrible, or even that my plot had grown so complex that I had no idea how to work myself out of it.  My brother/editor maintained that the reader may very well throw up their hands in disgust because it got so confusing, but not even that was enough to murder The Famous Mrs. Darcy. 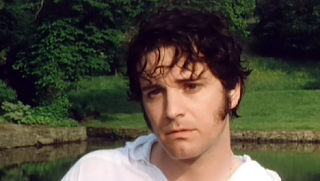 The killing blow came as I penned the last compelling, heart-rending chapter and I  realized that anyone looking for a sequel to Pride and Prejudice would absolutely HATE this book.  My Mr. Darcy had demons and passions and deep and treacherous crevasses in his soul.  He battled to retain his sense of self.  He had developed evolved to such a degree that he had become unrecognizable.

Plagued with jealousy, torn loyalties and problems without solutions, my Mr. Darcy turned to alcohol.  The greater the stressors of honor and duty, the more intense the conflict between loyalties, the more volatile became his temper.  My Elizabeth threatened to become a cipher in his shadow.  She suffered indignities and made certain choices that would cause Jane Austen to turn over in her grave. My detractors would be screaming "anachronisms" and "social consequences" even louder than myself.


“I was angry,” he insisted harshly, and his tone but increased her ire.
“You gave me away and refused to take me back again.  I bore another man’s mark and that was that.”
Of a sudden, Elizabeth found herself pinned against the door by a perfect stranger who made far too rough and free with his hands despite her attempts to escape him.  “Is this what you would have, Mrs. Darcy?” he hissed in her ear as he groped her.  “Is this the mark you would bear?”
“Let me go,” she insisted as she struggled and writhed to escape him.  He forced her to kiss him and there was nothing she could do to prevent it.  Despite how meticulously she had been trained, he had the advantage of surprise and there was no regaining the loss.  He was too large.  He was too strong.  He knew how to anticipate and forestall her.  He kept her feet from the floor and anything she did to resist him fired him more still.  He knew no restraint.  He would have what he would have.  He would do what he would and he meant to take the long way to get there.
“I don’t want you,” she pleaded, giving way to her tears.  “I don’t want you.”  She pushed against him desperately to no avail and knew she was utterly lost.
Then, just as suddenly, he raised his head enough to look into her face.  She turned it away, ashamed and angered by her weakness in showing her tears.  He yanked back her head by the hair upon it, and gripped her more fiercely against him.  “I was angry, Elizabeth,” he snarled menacingly.  “I was murderous.  I was this.”  He released her abruptly and stepped away and she crumpled to a heap on the floor.  “And you never believe me unless I show you.” 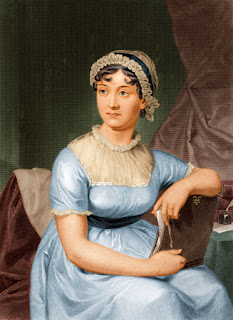 "The famous Mrs. Darcy" is actually a quote by Jane Austen herself.  She wrote to her sister, Cassandra, that she went to an art gallery while in town and searched for a picture that looked like "the famous Mrs. Darcy."  She didn't find one.  How could I usurp such a fantastic line and deface her characters beyond recognition?  Austenophiles everywhere would rise up in revolt.  They'd burn me in effigy, I have no doubt.  Thus, Piper Durant was born

I really love my hopelessly flawed character.  Mr. Darcy is dreamy and complex and frustrating, but Piper Durant is heartbreaking.  His slow descent from grace—his desperate scrabble up the scree of his own degeneration becomes the tale, the lady tied to his father the goal which keeps him fighting even as the ground gives way beneath him.  Will he ultimately prevail?  Or will he at last convince himself Cassandra Sterling nothing but an illusion, not worth the effort and surrender to the inevitable?

Perhaps a little of both, or perhaps not.  In Stranger than Fiction (a truly fabulous movie, BTW), Professor Jules Hilbert (Dustin Hoffman) tells Harold Crick (Will Farrell) how to tell if his story is a romance or a tragedy.  Harold carries around a little notebook to keep a tally.  I'm not certain which way My Father's Son will tip on the scales.  Like the movie, I rather imagine I won't know until the end.

Disentangling My Father's Son from The Famous Mrs. Darcy was a harrowing process.  The events in Pride and Prejudice had become levees which kept the plot contained.  Without that restraint, the story has burst free of its banks, wandered freely, found its own course, and (hopefully) no longer resembles that which inspired it.

That said, here's the resolution of the above scene from The Famous Mrs. Darcy, shared posthumously:

Darcy lurked in the darkest corner of the room and glowered at the heap of cloth and hair on the floor, an island in the midst of shattered china and splattered food.  It had wracked for some time, never making a sound or revealing the lady he knew sheltered beneath.  Then, it had gone utterly still.  Blazes!  How had she become so thin?  But for the tresses tumbled around her, a man would not see the person at all.  His heart wrenched to see it, but still he lurked.
Finally, he was able to cool his passions and trust his honor enough to speak.
“I hated everyone,” he began.  “I hated Bonaparte and the general and every last superior that demanded of me more than I had to give.  I hated the ministry.  I thought you had the solution, and so I walked with you, but nothing helped because of all else, I hated myself for dragging you into this to begin.
“A year gone, I made a vow.  I knew my life and myself and I swore I would never drag you into this mire.  I would never seek your hand because I knew this would destroy you.  But then I knew you loved me as completely as I loved you, and what else was there to do?  I lied to myself and said I could keep my vow to protect you from the ministry and the ton and the demands of my family.  I lied.  I broke my vow when I followed my heart instead of my head, and, selfish bounder that I am, took you to wife.
“And there we were, exactly where I knew we would be and I hated myself.
“There was no greater vermin in that hothouse than me, Elizabeth.  I was so angry with you for disobeying me and thinking you had a better answer than me.  I raged that you would put yourself in such a perilous position, but especially that you would do what I have been attempting to do for six months.  You solved a problem I could not and that would never do.
“I knew they put their eyes all over you and I hated each one, to a man.  You obeyed me.  You did as I prompted you.  You prevailed.  But I raged that you would choose to obey me then when betimes you defy me.   Had I come to reclaim you as I tried and tried, I knew that ultimately I would anger you of a purpose until you hated the sight of me, so I could take what was mine by right no matter what you thought about it.  You are my wife, and I wanted nothing as I wanted to subjugate you.”
The heap hiccupped, and Darcy trusted himself enough to approach her.  He crouched down and began picking up shards of china from around her and tossing them into an out-of-the-way pile.  He gently began to excavate her tresses, marshaling them into some sort of order as he did so.  He at last found her face, but she again hid it from him, so he settled with smoothing her hair.
“There is darkness in me, my precious wife,” he confessed soft and still.  “There are black abysses that consume all light, as wide as a pin and as deep as all eternity.  There are cavernous pits where devils swarm out like bats when unearthed.  I would reveal to you all the chambers of my heart and the dreams in my head, but never, ever can I take you to the black places because it would destroy us.  Had I done as I wished this morning, I would have driven a knife in your soul again and again, until there was nothing left—of either of us, for I would destroy myself in committing the abomination of defiling you.  I had to stay away.  I had to do what must be done to protect you—to protect us.”
He rose and retrieved a broom from the grate, then swept the debris into the dustbin.  He said nothing, however.  She remained as she was, and the place cleared, he sat down upon the floor beside her.  As he spoke, he caressed each spot on her flesh where he felt certain a bruise would appear within the hour, but he could not repent it.  She had to understand he was not the vaunted Fitzwilliam Darcy.  She had to know him true and beware.  He scarcely touched her, but he felt her begin to unknot ever so slightly and it was enough for him.
“For ten years I have been struggling against the black places. They wax and wane some, but never do they cease to be and rarely do I feel I have had a victory over them—at best, we reach a stand-off.  Betimes they feel cankerous, festering, fetid sores that are slowly eating away my soul and it aches so, I know surely I have felt the eternal fires of hell.  Naught but the light brings any healing, but a man gets precious little of that living in the shadows.  Without it, there is nothing to slow the advance.”
Again he sought her out by grazing his fingers over her cheek, and she allowed herself the great luxury of peering at him with one eye.  He could not help but smile, and perhaps smirk a bit, and he managed to coax her into revealing her whole face.  “There you are,” he whispered, and laid a kiss upon her lips with his finger.
“As much as I could not drag you into hell with me, little bird, I could not there banish my brother.  That would have been the worst betrayal of all, for each one of us, all three.  He needed the illumination, and the only light I have ever had is you.

If the book is there, I think you should still use it, just maybe not as Mr & Mrs Darcy. A different couple who are not famous, so the reader won't have any pre-conceived ideas. Just a thought...
Laura