at 7/10/2012 08:00:00 AM
Recently, my good friends over on the iWriteNetwork Facebook group were tallying up how many words they had finished of their current work in progress.  Some proudly proclaimed thirty- or forty-thousand words, halfway to the acceptable number for the average novel, which is 80,000 words.  Woohoo!  They were on their way.

I got to thinking, hmmm.  I wonder how far I am.  Now, (until I transfer it all over to yWriter5) each chapter of mine is a separate WordPerfect file (the one true word processor and victim of the great apostasy), so I painstakingly cut and past all 25 chapters into one big long document and then hit the word count button.  [drum roll please!]  I about fainted when it topped out at 149,000 words.

This is a problem.  This is a really, really big problem because I'm only halfway finished with this first installment of my series.  Did I mention that the plot of My Father's Son is so complex wrangling it into submission is like making a dozen two-year-olds dance a waltz?  (Sidebar:  it includes all the plot that has absolutely nothing to do with P&P and easily transferred over from The Famous Mrs. Darcy.)

I knew I had some trouble as I went along because, well, I was sorta kinda keeping track on a spiffy little spreadsheet I made, but then I did something stupid (don't ask me what) and the calculations went all hinky, and, being a writer, not an accountant, I just ignored it and told myself I'd fix it later.

I also had decided to just write chronologically as it came to me and then sort it out into the different installments later.  It would work something like this (maybe):

I like to compare it to Robert Jordan's various protagonists in The Wheel of Time series, Rand, Perrin, Mat, Egwene, Nyneave, etc., and, how in the latest novels, some volumes focus almost on one exclusive story line.  Except, I would blatantly dedicate the volume to the character and, I hope, be less tedious confusing in the process.

That said, I know I've got at least 50,000 words I will lop off right off the top and drop into Lady's Maid. No sweat.  Next step: slash my verbosity.  My recent reading has really opened my eyes to the necessity of this.  Let's be generous and say I reduce the bulk by another 25,000 words.

However, that still leaves me with 75,000 words not quite halfway through the rough draft.

Now, I personally adore a nice fat book so long as the plot is compelling and the characters complex. . . .  Or, is that the characters compelling and the plot complex?  However, I know publishers balk at such beasts coming over their desk.  It's not that such books never get published, but I rather imagine the more you go over, the less likely the book will get picked up.

(Then, there's the J.K. Rowling school of thought:  get a publisher for a short little book and gradually warm up your audience to the heavy tomes the more they get addicted to your work.  Sort of like convincing a frog to stay in a pot of cold water to be stewed.)

As I said yesterday, what I have written thus far of My Father's Son focuses on Piper's denigration from a squeaky clean schoolboy full of honor and virtue to a hardened shadow warrior obsessed with his duty and getting the job done no matter the cost.  The closer he gets to his goal of ending the decades of war with Bonaparte and the French Empire, the farther away he strays from his dreams of a lifetime with the one woman he's ever loved whom he has worshiped from afar for years.  Then, when he's finally built a hardened shell around himself and surrendered all claim to the lady, she falls into his way and he feels his resolve to spare her his drama begin to crumble. 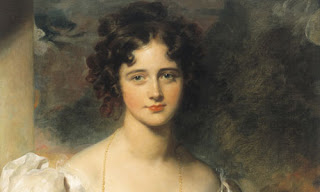 Here's my question:  do I focus all of Book One on Piper's slow slide down the slippery slope of decisions of expediency, honor compromised by justified means, and abject despair?  Or, do I focus on developing his relationship with Cassandra and pick up his past history here and there as I may?  Or, do I go for broke, write the danged novel chronologically and let the chips fall where they may?

I haven't the faintest idea, which is probably why I haven't written anything for weeks.  What do you think?  If you would, answer the spiffy survey at the top of the the right column, and then leave your thoughts in the comments.  I really would like to know the opinions of other readers, writers, and lovers of stories of all kinds.

Speak up.  Don't be shy.  Heaven knows I don't know what I'm doing.  Your opinion is at least as good as mine.

Torn between two options. Haha On one hand, it sounds like you have so much to offer - why cut it away? And on the other hand, you may be right about the publishers - but you never know.
The main question is what will make the book the best.
I'll always side with romance, but - in all honesty - a good romance isn't satisfying for me unless the characters are deep. And what better than background to make it that way?
So, I get your dilemma. In my opinion, cut it down as much as you can, but try not to lose anything vital on either plots. Of course, that's just my opinion! But background makes you care for the character and their future/story so much more. So, I'm going to head over and vote 'Full speed ahead.' :) Either way, good luck!

I think if you write the story your heart is telling you to write, you'll be able to split it into separate books after it's all written, if that is still what you want to do. I think the most important thing is to get it all out and don't worry about word count til later!

I agree with Wendy. Cut your words to the bone and split the books. I did that too. I simply needed more book to cover the subject.

If you've got this much story to tell, you definitely have some decisions to make. Of course you have to cut and tighen the story as much as you can, evaluate each scene and decide if it really moves the story foreward. You'll never sell a regency that long. SciFi / Fantasy can get away with longer books because they have world-building they have to do. So, maybe this book is really a series. If that's the case you need to decide on character/story arcs for each book. That should help you decide what to include in each.

Of course, if you're okay with self-publishing, you can make a huge ebook and who's going to know. It's when long books take up shelf at the bookstore that size is an issue (assuming you're holding the reader's interest through a really long book).

You are all so great to comment and most helpful. I've been learning so much about my writing over the past few months, I feel like maybe I can make this work.

Donna, I've pretty much decided that my book isn't Regency romance, per se. It's more historical fiction, which is part of what adds to its bulk. But it's an incredibly interesting period with lots of opportunity for characters to get into trouble.

I think, having written a 200K+ first in a trilogy myself would advise pair down plot elements. By eliminating some, cutting scenes amd making the point of a whole scene a sentence elsewhere, one can get back on track. Jordan has a lot of characters to follow that needed to grow and thus we get large books from it. But is Regency romance and spy thrillers worthy of 2000 pages spread across 3 books?