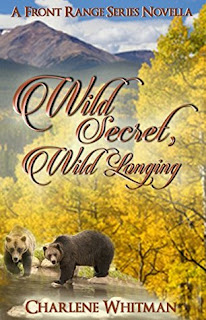 LeRoy Banks has no time for love or romance—he's busy breaking in horses at Whitcomb's ranch. But on the afternoon of his brother's wedding, a grizzly attacks the herd of horses, and though Whitcomb's ranch hands shoot him, the bear lumbers off, injured and enraged. LeRoy, the only competent tracker around, heads out into the Rockies after the bear before it kills again. But not before his ma, a Cheyenne medicine woman, gives him a warning. The mountain holds secrets, she tells him, and LeRoy must not be afraid of what he'll find. Unsettled by her puzzling words, he sets out, unaware of the dangers he is about to face—not just to his life but to his heart.
Geneviève Champlain has spent long, lonely years in isolation in the mountains, her life a trail of broken dreams, loss, and heartache. Her supplies running out, she is teetering on the edge of despair and madness as a snowstorm blows in, signaling an early winter. Her hope is failing—she knows she cannot face another winter alone. Yet she sees no way out. She can never leave her cabin and live a normal life like other women. There is no place for a tainted woman like her in frontier society. Before the storm blows in, she learns the killer grizzly is close by. She has no choice but to head out and try to kill it before it reaches her cabin. Yet when she tracks the bear, she finds something she never expected—something even more threatening than a grizzly.
In this novella, the fourth in a series of Western historical romances, Charlene Whitman proves once again her exceptional skill at combining a believable plot, realistic characters, and delightful prose to draw her readers into her worlds rich with color and texture, light and sound, for a deeply satisfying experience.

LeRoy Banks is a young horse wrangler who also happens to be of mixed race. Dealing with the prejudices of the day proves more difficult for him than his brother who more resembles their white father, rather than their Cheyenne mother, as does LeRoy. However, as Whitman introduces the character, the reader first gets to know the man. His physical features are almost an after-thought. The strengths of his mother and her particular skills figure prominently as the plot unfolds but are skillfully nuanced. While she is an adept healer and somewhat prescient, Whitman chooses to emphasize her love, support, and faith in her son, and his respect for her and dependence upon her wise counsel. There are no caricatures in this story, of any race.

Whitman truly addresses the interracial strife of the day as she introduces her second protagonist, Genny Champlain. This young woman survived the massacre of her emigrant family and her own sexual assault by the Pawnee as a young child. She has been living in isolation and virtual slavery for more than a decade. Her captor, an hermitic mountain man, has died but left her so emotionally scarred, she continues to live a solitary existence. LeRoy stumbles upon her while tracking a grizzly that wrecked havoc on a herd of horses in his charge. He spends the remainder of the story discovering her secrets, earning her trust, and breaking down the walls of abuse that have imprisoned her for so long.
Instead of riding rough-shod over subject matter rife with opportunities to offend (such as sexual assault and interracial relations), Whitman not only acknowledges the difficulties but treats them with a touch so sensitive, the reader absorbs it with a sense of comfort and clarity. She addresses the issues---even makes them a central theme in her story---without bludgeoning the reader with either sermonizing or graphic descriptions of all that is evil in the world. Whitman repeatedly demonstrates this is one of her greatest skills.
In the same token, she avoids the trap of political correctness that imposes anachronistic sensibilities onto the social mores of the past. As just one example, she deftly side-steps the "Indian" vs "native American" problem that crops up in period pieces by using the vernacular of her characters, "Injun." The actions and attitudes of her characters by and large are true to the era in which they are portrayed, which I find refreshing indeed.

Finally, "sweet romance" may be off-putting to some readers, as the experience can be akin to swilling pure grenadine, with just as little substance. However, Whitman again demonstrates her refined skills of balance and discernment, creating a rich romance cognizant of very real and almost overwhelming sensibilities inherent in any such relationship, but practicing restraint in both her characters' actions and her own writing. Ingestion of this work should be compared to a perfect stir-fry: just the right balance of sweet and savory, salty and sour, rich in color and texture, and enough heat to be interesting but not so much as to negate every other sensation.

Simply put, this book is everything I have come to expect from this author, if a little shorter than I had hoped. Her world creation is authentic without being intrusive, her characters complex and heartfelt, her plot intriguing and engrossing without challenging the credulity of the reader. Whitman does a superb job of taking the reader to the time and place. She captures the era perfectly not only with the external trappings but with the attitudes and actions of her characters. That said, if and when they act contrary to the prevailing attitudes of the day, she creates a rich and satisfying read.

Whitman is a pseudonym for C. S. Lakin, one of my favorite contemporary authors. In style and substance, this novella fits well with her catalog of fantasy and literary fiction, although not quite as polished as her other works I've read. I did find that her denouement lagged a little, and some of her tertiary characters felt a little too pat/flat in their responses to the situation, particularly at the end.  It just seemed a bit too easy.

That said, I did read an advanced reader's copy, rather than the final release, and the very format of a novella precludes the rich development of characters not central to the plot. In addition, this is the third novella in the series, of which previous works I have read none. My issues with the tertiary characters may well have been addressed in previous installments. I look forward to going back to the beginning and savoring each story.

Each genre comes with its own set of tropes, Westerns and sweet romances entirely different from literary fiction (thus the pseudonym). This issue and those above argue for negation of points docked, as does the rich delight that is her prose. However, this is the author of Conundrum and Intended for Harm. If I gave this work the same rating, I feel like I would be demeaning them. Based on this criteria, I give Wild Secret, Wild Longing 4/5 stars.