Single Dad Laughing: Why Can't I Not be Shy: Lessons Lorraine Taught Me

at 12/10/2010 01:00:00 PM
Yesterday, on SDL, Dan posted about shyness and how to overcome it.  He does a good job of stating both the obvious and the profound, with some good ideas about how to get past the fear of inadequacy and rejection which can be debilitating for a lot of people, including myself.  Here's a quote:

I find this to be very true from my personal experiences.  I'm posting this today not only to share my response, but to thank a dear friend for her positive influence on me.  I've overcome my shyness a great deal over the past year, and it's all due to Lorraine who taught by example.

I have spent the vast majority of my life being painfully shy. My most vivid memories are of abject humiliation, like when I was four and thought I had been to a neighbor's house for dinner, got all excited and ready to go, then was told as I headed for the door that they really meant my older sister. Any four-year-old would do this. No? Or when I was five, started eating a Popsicle as soon as I got it in my hand and was reprimanded by my friend's mother that we don't open something until it had been paid for. Typical five-year-old behavior, right? I still cringe. The list goes on and on. I also went to twelve different schools in twelve years, and making friends became more difficult with each move.
The first thing that really made a dent in my shyness was a position for which I volunteered which required me to know the names and faces of about 100 different women. I knew maybe ten. That forced me to go up to people and introduce myself and ask about themselves. The fact that I'm really bad remembering names has always been a big hindrance to me, but now I just say on first introduction, "I'll ask you your name at least five times, so don't take it personally. I'm just really bad at it." It always gets a smile and a laugh and each time I'm less afraid to insert the disclaimer. By far, an experience with my friend earlier this year changed my outlook entirely.
We had known each other for fifteen years, our sons attended the same schools, were in Scouts and youth activities together, and our two youngest started up a band and were best friends. We carpooled, regularly went out to lunch and sat and gabbed for hours, we had attended get-togethers at their house, they even threw my youngest son's 16th birthday at their pool, but not until this year did I really come to appreciate the type of person she was and what a great gift she had in spreading happiness. 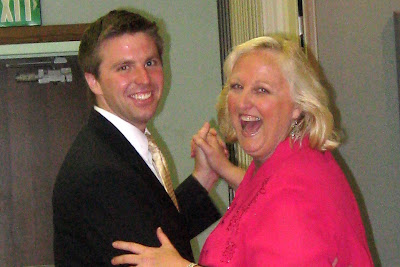 In January, 2010, Lorraine was diagnosed with metastatic uterine cancer. The doctors thought that they could control it enough to get her one last year of life. We all planned on it. We decided that in December when she was in remission, we would all go on a cruise to celebrate. But, she had a rough row to hoe to get there. Because they were inundated with phone calls and visits, and because Lorraine had a difficult time telling people over and over again exactly what was wrong with her ad infinitum, I became the Ricker's social secretary, if you will. I was the point of contact for friends who needed information, etc.  I sent out regular posts updating them all on Lorraine's condition at the time. The friends came out of the woodwork. Every day, Andy would give me a new list of people to include in the update. I have at least 50 people in my address book who I have never before met, all close, intimate friends of the Rickers.
I also had the privilege of helping her a bit during her several hospitalizations and chemo sessions, and not until then did I truly realize Lorraine's greatest gift. The lady smiled, constantly. She laughed. She made conversation. Everyone knew her. The people at their favorite restaurants knew her by name, even at the fast food places. Wherever we went, we'd find people who were genuinely glad to see her.

Even as sick as she was, she would talk and laugh with folks like she knew them all their lives, even if they had just met. She turned her chemotherapy sessions into support groups. If she missed her regularly scheduled appointment, her friends/co-patients would all ask about and for her. Her chemo doctor, her radiation doctor, those who cared for her in the hospital, every nurse with whom she ever came into contact, home, hospital, or office, all cared for her in a way seldom seen amongst clinicians who have to guard against getting to close to patients for their own sanity's sake. She had such a magical way of bringing life into a place, I was ever in awe of her.
As hard as it was, even heavily medicated, she always had a joke or a smile for her friends. When people came to visit her, she tried to help ease their grief. When it became obvious that chemo and radiation were no longer working and there was no more help to be had, she took final leave of what had quite nearly become family in the doctor's office. Everyone cried, even the doctor---especially the doctor. During the last days of her life, the hospice staff was amazed at how many of her friends helped care for her. We always had at least four of her friends with her to provide her safe and proper care. We never had any difficulty keeping staffed. They often commented on their surprise to see her surrounded by so many people who loved her.  They asked if we had been hired. The day Lorraine died, there were so many people in the house---so many who absolutely had to be there, hospice could scarcely get in to perform their functions. Lorraine's cancer was aggressive and gave her only four months after her initial diagnosis. After her funeral, her family decided they wanted to celebrate her life with her favorite pastime, a party. We threw a cook-out, and four hundred of her closest friends attended. Lorraine was a fantastic influence on me, and when we lost her, I knew she left a big hole in the lives of a lot of people. I could never reach the mark she set, but I could try. I want to be someone who brings smiles to the faces of others. I can provide a glimmer of the burst of sunshine Lorraine always brought with her wherever she went. So, now I look people in the eye and smile, I talk to the checkers at cash registers, I tell the lady in the elevator how festive she looks all decked out in Santa attire, I chat with people in line. It feels good. It feels amazing. 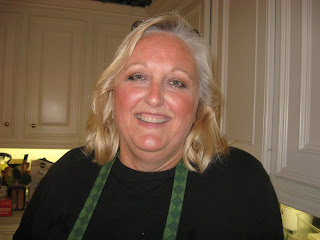 I still have a long way to go. I'm still not a big party-goer, and I'm certainly not the life of the party, but I am no longer afraid to introduce myself to people at church who I don't know. When I see a cluster of my friends, I go up and join the conversation, rather than step back, feeling that circle is closed against me.  I still cringe when, five minutes after the fact, I realize I said something really stupid or thoughtless or rude or whatever, but I push back the resultant instinct to cower in a corner for fear of what people think of me.

I do worry about what people think of me, but in a way that says, am I bringing Lorraine's sunshine? Am I following her example? It's a paradigm shift for me, but a good one, and one well worth the considerable effort to effect the change.

Thank you for this Penny. Not only did this help me see what a wonderful friendship you had with a fantastic woman who is greatly missed, but you helped me realize that I need to be more outgoing and friendly. I worry a lot about what people think of me, which prevents me from being friendly and just smiling. A lot of times I won't reach out to others, but I will make a change now! Thank you! The time I knew her, Lorraine was ALWAYS smiling! Every time I saw her!

Well, obviously Lorraine's influence worked very well, b/c I would NEVER think of you as shy!

@April: absolutely! Horrendously, agonizingly shy. I'm ***always*** afraid of what people will think of me, and cringe at what I perceive (too late!) as major infractions of the 'like me' code.