Book Review: Legends and Lore: An Anthology of Mythic Proportions 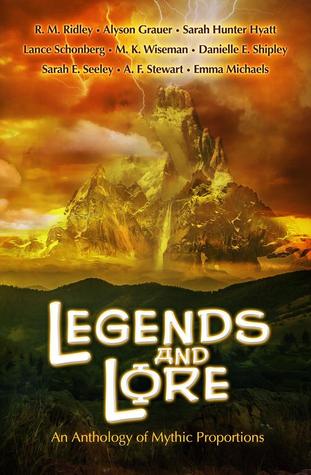 Delve into myth and legend, where the Fates force post-modern man into a world of the unknown—a world long since dismissed as ignorant superstition.
The Brother-Sister Fable by Alyson Grauer: a young boy disappears into a realm where only his sister can follow.
Faelad by Sarah Hunter Hyatt: Claire Whitaker didn’t even know she was Irish, let alone The Morrigan, the goddess of war.
By Skyfall by Emma Michaels: a mer-couple from Atlantis find themselves in the middle of a human murder investigation.
Charon’s Obol by. R. M. Ridley: Jonathan Alvey didn’t believe in gods, until he helps a lost child find her all-powerful parents.
Peradventure by Sarah E. Seeley: a jinni must choose between the woman he loves and destroying the city that persecuted her.
Natural Order by Lance Schonberg: when Carlos Vasquez is kidnapped, he discovers powers within himself to change the world.
Two Spoons by Danielle E. Shipley: A little girl’s soul meets its match in the family diner’s most mysterious patron.
Grail Days by A. F. Stewart: Living forever has its drawbacks, especially when you spend it clearing away the messes of other immortals.
Downward Mobility by M. K. Wiseman: they say love conquers all, but can it save a Valkyrie when she breaks all the rules?

One of the most fun and most difficult aspects of filling the role of editor on an anthology is getting to choose which stories to include. Three times a year, Xchyler Publishing holds short story contests, including Steampunk, paranormal, and fantasy genres. For each contest, we provide a theme; in this case, Mr. and Mrs. Myth. Time and time again we get asked the same question: what do  you mean by that? Our answer is always the same: what do you mean by that. This year, over forty authors decided they wanted to tell us.

Narrowing the field down to these nine titles was extremely difficult. It entailed reading every story, rating it, filling out a 92-question evaluation form, averaging the sum of scores from a number of editors and marketers, and then figuring out how many stories we could fit in and still stay within our target word count. It's not as easy as it sounds. However, the end result is worth it.

Then, the work begins.

Some of these stories came in all but ready to print. They required very little tinkering to make them absolutely perfect. Others required a fair amount of hammering and pounding, testing and adjusting, until we found that sweet spot where storytelling and writing meet.

Four of the authors of Legends and Lore are brand new to The X: Emma Michaels, Lance Schonberg, Sarah E. Seeley, and Danielle E. Shipley. Each of the bring their own unique style and outlook on the world and incorporate them into their stories. They offer us mermaid researchers, fatherless children, a twist on a biblical classic, and the devil's son finding love. I'm certain you will find something to entertain and maybe even enlighten.

Bottom Line: I can always find room for improvement, especially of my own work, and as the primary editor of this work, the buck stops here. That said, these are great, well-written stories with interesting plots and intriguing characters. And you don't have to be a fan of paranormal fiction to enjoy it.

Finally, don't forget our Rafflecopter giveaway and our blog hop. Click through the various stops to read all about a different author each day. Keep an eye out for them. They are going to do great things.

AN ANTHOLOGY OF MYTHIC PROPORTIONS

Alyson Grauer
THE BROTHER-SISTER FABLE
Alyson Grauer is a storyteller in multiple mediums, her two primary canvases being the stage and the page. On stage, she is often seen in the Chicago area, primarily at Piccolo Theatre, Plan 9 Burlesque, and the Bristol Renaissance Faire. Her non-fiction work has been published in the “Journal for Perinatal Education” for Lamaze International. Her short fiction can be found in Tales from the Archives (Volume 2) for the Ministry of Peculiar Occurrences and in one other anthology from Xchyler Publishing, Mechanized Masterpieces: A Steampunk Anthology.
Alyson is a proud graduate of Loyola University of Chicago and hails originally from Milwaukee, WI. Her debut novel, On The Isle of Sound and Wonder, will be released in November 2014 from Xchyler Publishing.

Sarah Hunter Hyatt
FAELAD
Sarah Hunter Hyatt grew up outside of Salt Lake City, Utah. As a child, she kept notebooks of stories that she would share with her little sisters at bedtime. Now, an adult, her stories have matured but still occupy her thoughts (and notebooks). “Faelad” is Sarah’s second short story for Xchyler Publishing, her first being “Stunner” which appeared in A Dash of Madness: a Thriller Anthology. Along with writing, being a mom to three wonderful kids, and a wife to a patient husband, she also dabbles in graphic design.

Emma Michaels
BY SKYFALL
Emma Michaels is a cover artist, blogger, and author of the Society of Feathers series. Her love of blogging started when she created a book blog in 2009 which gave her the courage to finally submit her own novels to publishers. Emma Michaels’ publications now include Owlet and Eyrie (Tribute Books), Holiday Magick Anthology (Spencer Hill Press), and Cirque d’Obscure Anthology and Cogs in Time Anthology (Crushing Hearts Black Butterfly).
Website| Facebook | Twitter | Google + | LinkedIn | Amazon | Goodreads | Pinterest
♦ ♦ ♦ ♦ ♦

R. M. Ridley
CHARON'S OBOL
R.M. Ridley lives in rural Ontario on a small homestead, raising a menagerie of animals, including a flock of sheep and a swarm of foul. He has been writing stories, both long and short, for three decades, the themes of which range from the gruesome to the fantastical. As an individual who suffers from severe bipolar disorder, R.M. Ridley is a strong believer in being open about mental health issues because myths should be kept to stories.
Ridley's first short story, "Cost of Custody," appeared in Shades and Shadows: A Paranormal Anthology (2013). His debut novel, Tomorrow Wendell, Book 1 of the White Dragon Black Series, was published in May 2014. Blondes, Books, and Bourbon, a White Dragon Black short story anthology, will be released in April 2015, while Book 2, Bindings and Spines, will be released later in the summer.

Sarah E. Seeley
PERADVENTURE
Through two wonderful mentored research experiences, Sarah E. Seeley had the opportunity to work with dead sauropods and ancient odonates while acquiring her undergraduate degree in geology from Brigham Young University. She hopes to study more dead things in the future and contribute to scientific discussions about what makes life on Earth so amazing.
In the meantime, she explores the bright side of being human by writing dark fiction. Sarah’s independently published works include Maladaptive Bind and Blood Oath: An Orc Love Story. Another short story, “Driveless,” appears in “Leading Edge Magazine” Issue #66. You can learn more about Sarah on her writing blog at www.SlithersOfThought.com.

Lance Schonberg
NATURAL ORDER
In the middle of lecturing one of his children on the importance of following dreams, Lance began to wonder why and when he’d stopped following his. Gathering up a few salvageable shreds of unfinished stories, he began his first novel. He’s written several novels and many shorter works in the years since, and has had twenty or so stories see publication. At any given moment Lance is working on a novel and at least one short story—probably more—most of which fall into the broad buckets of Science Fiction or Fantasy.

Danielle E. Shipley
TWO SPOONS
Danielle E. Shipley's first novelettes told the everyday misadventures of wacky kids like herself. . . . Or so she thought. Unbeknownst to them all, half of her characters were actually closeted elves, dwarves, fairies, or some combination thereof. When it all came to light, Danielle did the sensible thing: packed up and moved to Fantasy Land, where daily rent is the low, low price of her heart, soul, blood, sweat, tears, firstborn child, sanity, and words; lots of them. She's also been known to spend short bursts of time in the real-life Chicago area with the parents who home schooled her and the two little sisters who keep her humble.

A. F. Stewart
GRAIL DAYS
A steadfast and proud sci-fi and fantasy geek, A. F. Stewart was born and raised in Nova Scotia, Canada and still calls it home. The youngest in a family of seven children, she always had an overly creative mind and an active imagination. She favours the dark and deadly when writing—her genres of choice being dark fantasy and horror—but she has been known to venture into the light on occasion. As an indie author she’s published novellas and story collections, with a few side trips into poetry and nonfiction.
She is fond of good books, action movies, sword collecting, geeky things, comic books, and oil painting as a hobby. She has a great interest in history and mythology, often working those themes into her books and stories. Stewart's first short story with The X, "Our Man Fred," appeared in Mechanized Masterpieces: A Steampunk Anthology (2013).

M. K. Wiseman
DOWNWARD MOBILITY
M. K. Wiseman is a librarian who recently decided that it would be fun to try her hand at the creation of books instead of mere curation. A 'method' writer, she likes to first try out the worlds that she builds. This has, admittedly, led to some strange results. (For example, she once elicited funny looks at her daily coffee shop by adopting a British accent for one day. We're all in trouble once she decides to write a space novel.) In addition to the dozens of stories currently marinating on her hard drive, she maintains two blogs, “Flying the Blue Pigeon” and “Millicent and Rue.” Wiseman's first story with The X, "Clockwork Ballet," appeared in Mechanized Masterpieces: A Steampunk Anthology (2013).