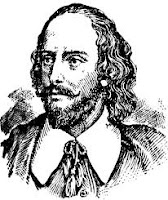 I'm not quite exactly sure how to take this, now that I think about it.  Like all brilliant poetry, there are many facets to explore and angles from which to view it.  Be that as it may, my son, Paul, age 23, has a Shakespeare class at university and decided to dedicate this to the senior people in his life.  The dedication was instigated when he said that no one told him they grow up so fast, referring to his five-month-old daughter.  He got a shower of 'cry me a river' from his middle-aged relations, and so thus came the sonnet in reply. I am going to go with my knee-jerk response on this one and proclaim it a beautiful sentiment and an undeniable truth.
Sonnet #2 by William Shakespeare


When forty winters shall beseige thy brow,
And dig deep trenches in thy beauty's field,
Thy youth's proud livery, so gazed on now,
Will be a tatter'd weed, of small worth held:
Then being ask'd where all thy beauty lies,
Where all the treasure of thy lusty days,
To say, within thine own deep-sunken eyes,
Were an all-eating shame and thriftless praise.
How much more praise deserved thy beauty's use,
If thou couldst answer 'This fair child of mine
Shall sum my count and make my old excuse,'
Proving his beauty by succession thine!
This were to be new made when thou art old,
And see thy blood warm when thou feel'st it cold.

I think a lot about why parents and grandparents believe their progeny is absolutely the most beautiful in the world, and also why couples tend to marry people with similar physical traits.  I suppose the latter is explained by the face a person meets every morning in the mirror, and thus, whether or not they are aware of or admit it, from that image develops their notions of beauty, or, if nothing else, familiarity and thus comfort.
And, that being given, the former comes as a matter of course.  A child is beautiful because of her resemblance to her parents, and each parent latches on to the features they admires most in one another.  Surely to gaze upon a ruddy, wrinkled, puffy face, distorted from the trauma of birth, and find in it oneself and one's beloved, creates such a sense of ownership that the bonding process begun in the womb gets a sensational burst of octane.
I was just going to post this sonnet and leave it at that, but the events of the past five months, the arrivals of the youngest three of our grandchildren, beginning in August and culminating eight days ago, insists that I have to add some proof to the pudding. I initially thought I would add our three cousin triplets, but then, Abram is so near in age to them, and then, how could I leave out Alora and Aaron.  Thus, the whole of the six most beautiful babies in the world, and finally Our family entire on December 19, 2010, with Dustin present but not yet having made his appearance.